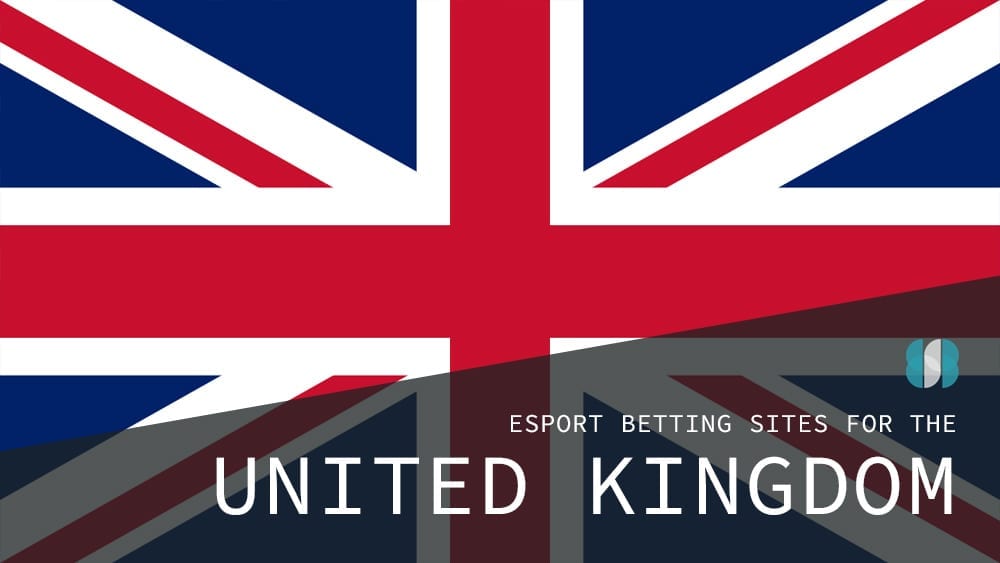 Betting on esports events is growing more and more popular in the United Kingdom and right around the world. It is perfectly legal to bet on esports from the UK, as long as you do it via one of the many licensed online bookmakers. The top UK esports betting sites include some of the biggest names in the gambling industry, including Bet365, WilliamHill and Paddy Power, which all have significant footholds at an international level. There are also some good esports betting sites that were set up with the sole purpose of catering to competitive video gaming, with these sites generally featuring more unique markets than the bigger corporate bookmakers. The best esports betting sites for the United Kingdom in 2021 are:

Esports betting is largely done on the top-flight leagues and tournaments surrounding professional video gaming. For instance you might find betting on the final stages of a League of Legends tournament, but you won’t find any markets on the online qualifying. This is because esports handicapping is still a relatively young game, and the depth of the player pools means new esports stars are emerging all the time. Our esports betting section will highlight the top five esports in October, 2021.

Esports betting in the United Kingdom

The United Kingdom has been one of the most important regions for esport’s rapid billion dollar growth in the last few years, with guaranteed sold out crowds gathered for every Electronic Sports League UK event held in the country (ESL is the premier eSports competitive league for Ireland and UK) hosting League of Legends, CS:GO, Hearthstone and Overwatch tournaments. Esports in the UK doesn’t look like it’s slowing down in both revenue and popularity any time soon. With a massive fanbase positively rabid for competitive Counter-Strike: Global Offensive (the #1 most watched esport in the UK), and equally growing audiences for Fifa, League of Legends, Overwatch, and Rocket League, the UK will continue to be a hotspot for some seriously great pro gaming events.

If you live in the UK and want to bet on both local and international esports tournaments, our special guide aims to point you in the right direction. United Kingdom residents can choose from a large number of locally licensed and regulated esports betting sites thanks to the country’s leading gambling legislation which ensures most of the world’s best online bookmakers actually run and are licensed in the UK – and all of them have full betting markets for the most popular esports tournaments of Call of Duty, Counter-Strike: Global Offensive, Dota 2, League of Legends, Halo, Hearthstone, Overwatch, Rocket League, StarCraft II, Warcraft and more.

The eSports scene is flourishing and expanding all the time, but there are some esports games that stand head and shoulders above the others, in terms of player patronage and prize money. The following are the most popular esports in 2021:

UK residents are some of the luckiest in the world when it comes to online betting or online gambling of any kind, because the government and the United Kingdom Gambling Commission (UKGC) have effectively licensed and regulated online bookmakers in the country, and fair and safe online betting practices are enforced strictly in the region. The UKGC has announced their efforts to specially regulate the rising boom of esports betting markets, which include skin betting and esports lottery betting. Punters in Great Britain have more options than anywhere else in the world when it comes to esports betting sites, with many great options to place bets on all the popular esports games. Our top 10 betting sites for esports in 2021 are:

Bet365 is the most well-known betting brand in the world, and their esports betting section stands out among the crowd, in the ever-growing UK esports betting sector. bet365 abides by all standards set out by the Gambling Commission and their esports promotions and other bonus offers are among the top ones that we promote on ESB. Bet365 has several big advantages over other UK betting sites, including first-rate Android and iOS apps, huge liquidity and trust levels. You can bet confidentally on esports from the UK with bet365.

Betway.com is a popular esports betting website in the United Kingdom, with their offering including all of the major events that take place around the world. Betway esports betting also features some streaming of live events, which is great for those betting on the go. For those who bet on mobile, they also have downloadable apps for both Androids and iPhones, although Betway’s mobile betting site does do the job. Expect bet types like win bets, place bets, map betting and overall tournament victor. Basically the esports betting offering at Betway is improving all the time and you should have them in your rotation.

William Hill is one of the oldest online betting sites in the UK, with this bookmaker founded by the eponymous owner. Will Hill features extensive esports betting options and they have some great promotions surrounding events. The professional video games available at this top UK betting site include League of Legends, WoW, Counter-Strike and many, many more. WilliamHill.com is universally regarded as one of the top online betting sites in the United Kingdom for many sports, including horse racing and football.

Does lack bonuses for new players looking to bet on esports, but they do have some really unique markets, including some FIFA esports leagues, such as Norway. Has the Gambling Commission license and is a big brand globally. Betsson has been operating in the United Kingdom for some time and is clearly among the top esports betting sites available in 2021. Their offering does include downloadable apps for both Android and iOS phones, although the process to download them is slightly different.

BWIN might being one of the best football betting sites in the United Kingdom, but they also provide an outstanding esports betting experience. BWIN was founded in Austria in 1997 but entered the UK market much later. BWIN has also got some great esports promotions up for grabs. Their technology is outstanding, with their website, mobile betting apps and wagering features putting them sounding near the top esports betting sites for the UK.

The world’s best online sportsbooks are based, licensed and regulated in the United Kingdom, so it definitely made our job harder to narrow down the best picks for our readers.

Is it legal to bet on esports in the UK?

Yes, so long as you are over the age of 18, you can legally and safely bet on esports.

The United Kingdom is one of the luckiest in the world when it comes to licensed, regulated and safe online betting. Since the introduction of the Gambling Act 2005 (applying to England, Scotland and Wales) and the creation of the United Kingdom Gambling Commission (UKGC) the country has been the leading trailblazer in embracing the growth of Internet betting and gambling with proper, effective legislation to keep its citizens safe (especially minors) while betting online with their real money. Because it has done this, most of the world’s best Internet betting operations have been running out of the UK for years, and the UKGC has since become the top name in licensing and regulation for local and offshore-based online betting and gambling operators. Basically, if a site has official UKGC licensing and/or recognition, it’s pretty much a given they are a legitimate and trustworthy betting site to place wagers.

The UK economy has captured a large chunk of gambling revenue from their significant legalisation and regulation efforts, and that includes a large portion of the growing esports betting market.

UK bettors can deposit and withdraw money for their esports wagers safely thanks to a wide range of secure payment methods supported at UK-licensed online bookmakers – and you can also bet in pounds (GBP) without the need for currency conversion fees. Credit, debit and pre-paid cards are widely accepted and highly regarded as the top options for any gambling-related activities, including esports betting, and MasterCard and Visa is almost always accepted. Transferring money through your personal bank account into your bookmaker account is also supported and recommended. Alternative banking options for UK esports punters who want a little more privacy or anonymity include virtual web wallet services such as Neteller and Skrill and pre-paid card services like Paysafecard, which can be bought over the counter at many local stores across the country.

How popular is esports and video games in the UK?

According to market insights from NewZoo, there are over 3.3 million esports enthusiasts recorded living in the United Kingdom in 2017. The majority of UK esports fans are aged between 21 – 35 and around 31% of these viewers are female. Alongside the rest of Western Europe, UK fans were responsible for 29% of the $32 million in total ticket revenue earned from major esports events held in 2016 (around $9,280,000) and hosted 26% of said pro gaming events (out of 424) with prize-pools above $5,000. The United Kingdom and the rest of Western Europe also accounted for 12% of the total recorded $93.3 million in major event prize money handed out to esports winners in 2016 (around $11,196,000).

The United Kingdom is the #5 market worldwide in terms of video gaming revenues. There are over 32.4 million gamers in the UK who will spend $4.2 billion in 2017, according to NewZoo. Console gaming dominates as the biggest segment of the gaming market, with recorded revenues around $2.0 billion, while mobile gaming will reach $1.1 billion and PC/home computer market $0.8 billion.

Out of all the most popular esports franchises in the world, Counter-Strike: Global Offensive takes the cake as the #1 most watched esport in the United Kingdom. 50% of these viewers are over the age of 30, versus 40% of the actual professional players they are watching. League of Legends esports is a close second in terms of current popularity in the UK.

How many people in the UK bet on esports?

According to a position paper released by the United Kingdom Gambling Commission, ‘Virtual currencies: eSports and social casino gaming‘, 8.5% of adults in the UK have ever placed a bet on esports, with recent participation hovering around 3% when the paper was first published (March 2017). 88% of these adults have bet with real money, 90% of bet with in-game items (skins, loot boxes, etc) and 78% of bet with both money and in-game virtual items. 58% of these UK bettors are men, and 42% of women, the latter of which is reported more likely to bet with in-game items rather than real money.

I don’t understand this game