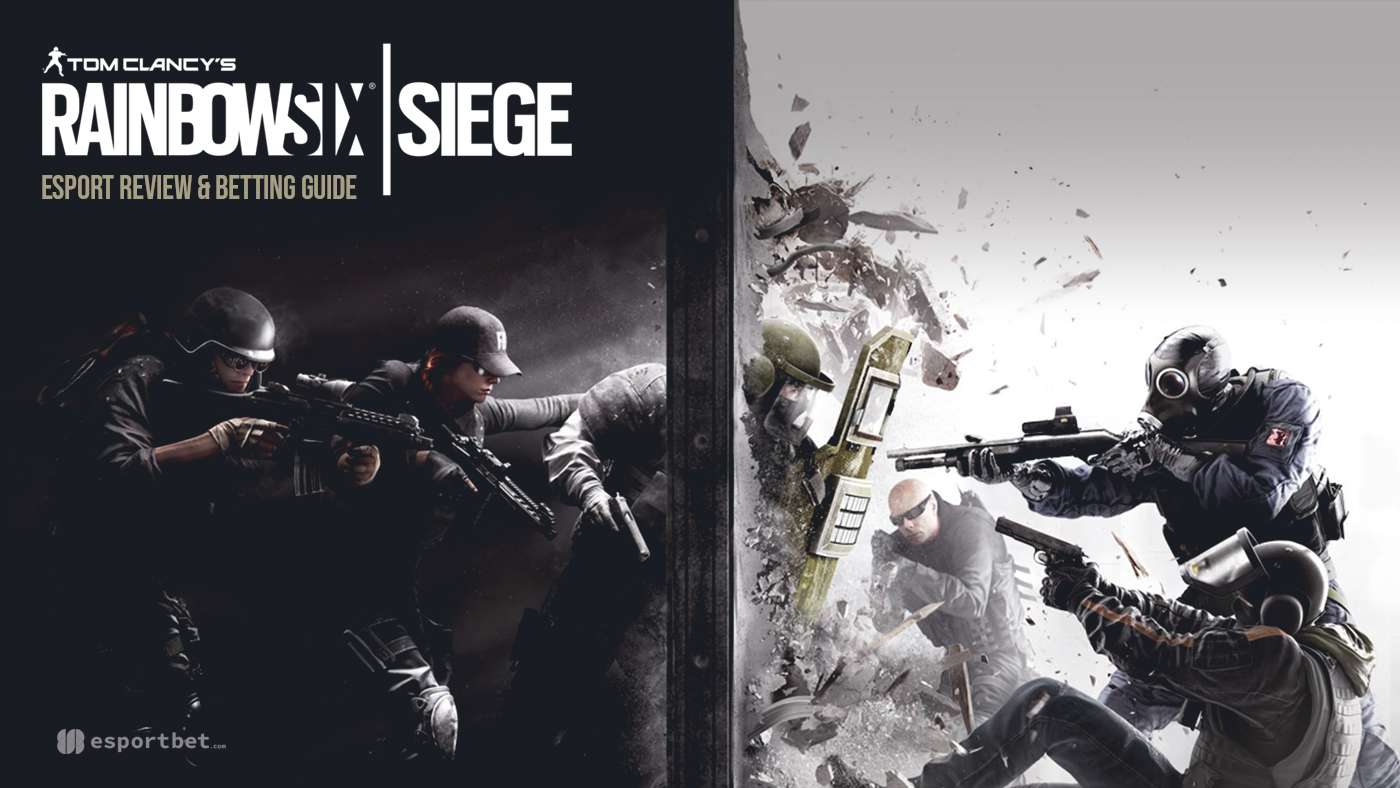 Tom Clancy’s Rainbow Six Siege is one of the most competitive multiplayer first-person shooter video games on the market and its esports circuit is growing at an alarming rate. Developer Ubisoft’s continuous content updates and engine improvements has secured a passionate, long-term fanbase, many of which now compete on the world stage.

With more financial investment from Ubisoft, the Rainbow Six Pro League is set to have a massive esports revamp in 2018. There will be more competitions, larger prize-pools and more featured teams than ever before. Before the renewed format kicks off, get familiar with the changes in our RB6 esports betting guide.

Concrete dates and times are currently unannounced for the upcoming season of the Rainbow Six Pro League and other Siege esports events. We hope to see more regular betting markets this year given the immense investment Ubisoft is putting into the Pro League, not to mention how amazing it is to watch competitive Siege players in action.

What is Rainbow Six Siege?

Tom Clancy’s Rainbow Six Siege is a tactical first-person shooter currently available on PC, PlayStation 4 and Xbox One. With a very multiplayer-centric format, the main part of the game is set online and is the reason for its wide-spread success in the competitive gaming circuit, which developer and publisher Ubisoft has entirely funded and organized.

Siege puts players in the role of one of 40 counter-terrorism operators based on real-world Counter-Terrorism Units (CTUs) such as the British SAS and Russian Spetsnaz. All operators have their own gadgets, nationality, specialities and weapons which can change up the dynamics and strategies employed in every match dramatically. Operators are divided into two groups – Attackers and Defenders – and their unique gadgets and abilities are tailored around their designation.

In every multiplayer mode of Siege, teams alternate between Attackers and Defenders. The Attackers must do everything in their power to complete their goal and the Defenders must barricade their base and prevent their opponents from securing the objective. Alternatively, both teams can with if they eliminate all opposing players if the objective has not been set in motion. The objectives are diverse and range from rescuing a hostage to carefully defusing a bomb.

There are three main multiplayer modes in Rainbow Six Siege used in the competitive esports circuit.

In competitive Rainbow Six Siege, two teams of five players clash across a series of different maps based in various countries with unique layouts. With multiple ways to assault a venue and defend it, the best players learn the in’s and out’s of every map to better catch their opponents off-guard and gain the upper hand.

Attackers start the round using their drones to infiltrate the Defender’s base and scan for enemies, vantage points and traps, while Defenders must barricade the rooms using reinforced walls, plant cameras and traps and prepare a fortified defence. After a minute, the game properly begins and both teams clash, sometimes violently, other times tactically.

In Casual, games are played Bo3 (Best of 3), but Ranked is played Bo5 (Best of 5). The Rainbow Six Pro League and other Siege esports tournaments use Bo3 for all matches except the grand finals, where games are played Bo5 to raise the overall intensity and stakes. If the match is close and both teams tie, an overtime round kicks in to determine the winner.

Why is Siege becoming a popular esport?

What differentiates Siege from many other popular shooters turned esports is its objective-centric structure. Rather than winning by simply killing everyone, the game encourages the completion of certain goals as a unit, and solo players are often severely outgunned and punished for mindlessly running off to find imaginary glory.

The many different abilities of the 40 operators available also give the game an asymmetrical structure, meaning teams are not always perfectly balanced – it’s up to each player to play their chosen operator to the best of their ability.

The numerous maps and the many ways you can both attack and defend are highly praised, and their destructible nature allows a level of adaptability and tactics not available in other competitive first-person shooters.

The unique playstyles of each operator and the care Ubisoft has put into making every single one of them viable in some way has contributed significantly to the lasting popularity of the game and its gradual transition into the esports scene.

What is the Rainbow Six Pro League?

Tom Clancy’s Rainbow Six Pro League is the main international esports tournament for professional Rainbow Six Siege, hosted and organized by Electronic Sports League and officially sanctioned and sponsored by Ubisoft. The league features the best talent in the PC community, with three seasons typically held every year that coincide with major updates to the game.

The first Rainbow Six Pro League event began in March 2016 and since then it has grown exponentially thanks to the game’s rising popularity with hardcore gamers and live-streamers over the years. While it originally only had two divisions for Europe and North America, it now hosts qualifiers in Asia Pacific and Latin America, with a further four regional divisions for Australia & New Zealand, Japan, South-East Asia and South Korea.

This year, Ubisoft announced further plans for a massive revamp of the current Rainbow Six Pro League seasonal structure. From mid-2018 to 2020, all tournaments will be split into two seasons running for six months each, starting in June to November and December 2018 to May 2019.

The current season, Pro League Season 7, will act as a transition period and will have its finals take place in North America in May. The finals events for Pro League Season 8 onwards will now feature eight of the best teams, two from each main division, and a US$275,000 prize-pool.

In addition to Tom Clancy’s Rainbow Six Pro League, there is the amateur Rainbow Six Challenger League league also run by ESL and sponsored by Ubisoft. It fosters up-and-coming talent for the higher-tier Pro League, and will shift to a two-season per year event starting in September and March and running for three months each.

Ubisoft have also committed to running two Majors every year, the Six Invitational and the Six Major. These events feature the biggest prize pools in the Rainbow Six Siege esports circuit and will host the top 16 international Rainbow Six Siege teams.

The Six Invitational has been a staple since the game’s release and will be held from February 13 – 18 with a $500,000 prize-pool. The new addition, the ‘Six Major’, will take place in Paris this August and award $350,000 in prize money.

The Six November Major, to be played in two different cities in late November, is also expected to create a fair bit of noise with esports bettors.

Rainbow Six Siege has extremely active esports channels on Twitch and YouTube, run by the ESL and Ubisoft. All fans, whether you’re a curious newcomer or hardcore Siege fanatic, can watch all past and present events for free and participate in community discussions via the in-built chat systems.