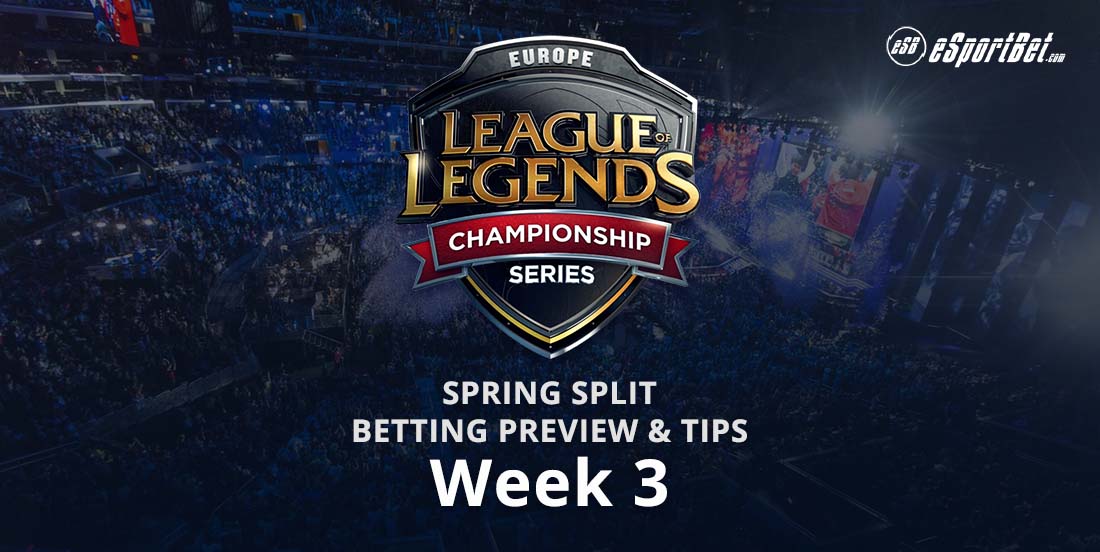 Even after getting a little too cocky with series veteran Misfits last weekend, all eyes remain on the revitalised Team Vitality as they defend their top rankings in Week 3 of the European League of Legends Championship Series (EU LCS).

Another glorious four-leg multi payout was just out of our reach last week after Splyce disappointingly rolled over to ROCCAT, though Fnatic, Misfits and Schalke continued to pull the rug from under the EU LCS’s favourites as we predicted.

Here are our top picks for Week 3 of the EU LCS Spring Split.

Unicorns of Love vs. H2K Gaming

Unicorns of Love remain the only winless team in the EU LCS heading into Week 3 and we’re not surprised one bit.

They’re prone to sudden collapse after any opponent gets a teamfight snowball rolling and without a strong shotcaller, their indecisiveness has led to predictable, albeit entertaining massacres.

H2K Gaming fared little better last week in match-wins, but they scored plenty of First Bloods and early skirmish victories that showed some significant improvement in their lane-control.

Both teams will be looking to bounce back from straight losses, but we reckon H2K are due for a proper comeback game this Friday.

Both the Giants and ROCCAT head into their clash on Friday in form, though we think the former are better equipped to deliver the upset.

The Giants have opted for the long-game over aggro plays to find great success this series, patiently gold farming and handing off a few battles here or there before overwhelming their overconfident foes around the half-hour mark.

Mid laner Felix ‘Betsy’ Edling is the Giants player to beat after his excellent performance as Veigar last week, smartly using his stack of AP to decimate G2 and secure his team’s logic-defying comeback victory. AD carry Pierre ‘Steeelback’ Medjaldi and his late-game Kog’Maw is another emergent threat ROCCAT will need to shut down early.

ROCCAT doubled down on its aggressive objective baiting last week which worked against both of its weaker, more impatient opponents. However, the Giants are a much more disciplined threat, and so long as they keep promising ROCCAT mid-laner Jin ‘Blanc’ Seong-min from dominanting as Azir, they can set the pace once more.

With pinpoint precision as Malzahar, Nukeduck and company have shut out numerous enemy carries and turned around many early skirmishes with calm and coordinated counter-plays.

As much as we’ve rooted for Schalke since the preseason, however, Team Vitality have shown superior macro play in almost every single match to-date – and we’re expect another decisive victory here.

Whether it’s mid-laner Daniele ‘Jiizuke’ di Mauro assassinating foes left, right and center as Ryze or support Jakub ‘Jactroll’ Skurzyńsk making the most of the late-game, they show no signs of ceding their top position.

Fnatic are on the verge of a bottom placing and desperately need the win this Friday.

However, their performance last week shows they have yet to improve upon their terrible lane management habits, allowing several opponents to backdoor their Nexus with inefficient recall.

Misfits to beat Fnactic – 1.90 at Betway.com