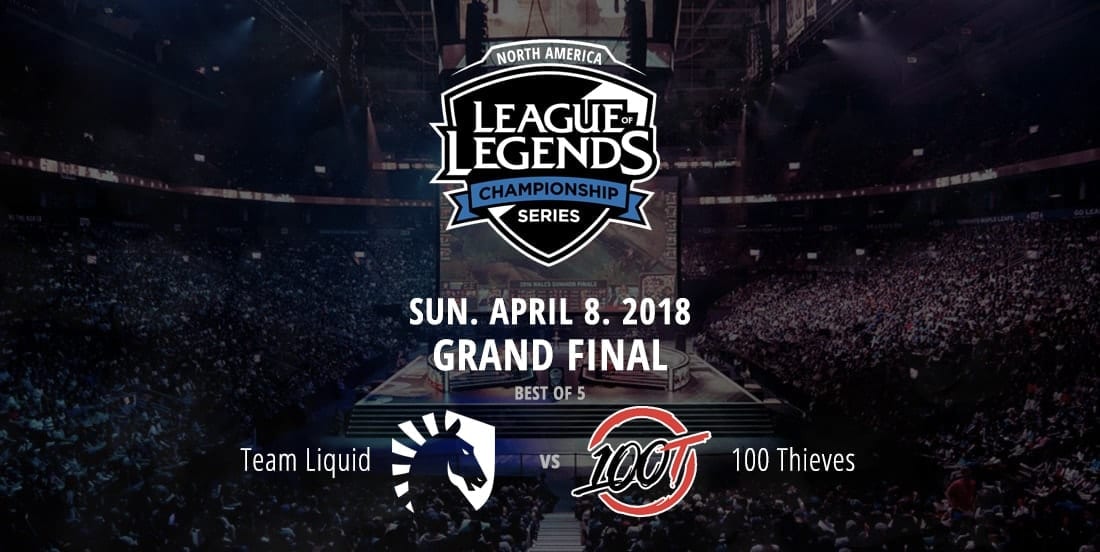 Team Liquid and 100 Thieves clash in the final of the League of Legends NA LCS on Sunday.

The former represents the old guard, being around near the beginning of esports while the latter represents a new beacon of hope for any hoping to join the esports scene.

This monumental match will determine which new team other than the big three will have its banner hung from the rafters in the Riot Battle Arena.

Team Liquid, paying -200 with BetOnline, arrived at the playoff stage multiple times in the past but, notoriously, have finished in fourth place most of the time.

This weekend will be the time for them to see if they can become the fourth team to be crowned split champion. Triumphing over C9 and FOX, TL may not have had the most difficult path into the finals.

But their dominating performance in each series spoke for team’s strength in itself.

100T, paying +150 with BetOnline, were a playoff contender to be sure, but not many would predict them to arrive at the finals.

While they received a buy in the first round, their series with CG exemplified how competitive this team could be. Using a combination of old names found across a multitude of teams, 100T has managed to weave a composition of players that at first seemed incompatible but has transcended all expectation.

ALSO READ: HOW TO BET ON LEAGUE OF LEGENDS
UPCOMING: ESPORTS TIPS

Team Liquid and 100T are both going to have a slugfest, namely in the botlane. All star Doublelift will be facing against possibly the most carry intensive ADC in Cody Sun while greeting his former CLG support, Aphromoo. The toplane matchup of Impact and Ssumday should declare which Korean import reigns supreme, albeit it may end up in a tank noodle fight. Both teams have a lot on the line and neither wants to settle for second place.

Priorities – More than ever, Doublelift has been flexing his muscles and the crowd has been enchanted. Every single performance that Doublelift has given is backed by his incredibly scoreline to the point where the team centers around the ‘protect the ADC’ composition. Giving DL an ADC of his choosing with ample support from Olleh, Xmithie and even Impact will most definitely be TL’s game plan.

Top Players – If not apparent, Doublelift is the surefire carry for Team Liquid, performing match after match with outstanding DPM, KP, and KDA. Despite the stellar ADC, Pobelter is playing second fiddle to the spotlight but still serves as an important foil for DL. It goes without saying that every role is important, but for TL, the mid and bot lane carries are the true stars of the show.

Weaknesses – When the dust settles, the main point of concern for TL would have to be mid and top lane. Pobelter is undoubtedly a mechanically solid mid laner; same goes for Impact in the toplane. The main concern is one lane becoming too strong to match in the split push. With TL’s strength being teamfighting and their drafts reflecting such, being unable to match the split push pressure would be catastrophic to a snowballing effect against TL.

Priorities – Similarly, Cody Sun will be the pivotal member on 100T. The ADC superstar has been the main focal point for every teamfight, skirmish, and rotation that 100T has initiated and it usually falls to the question of whether or not he can free fire from the backline. Grabbing Caitlyn or any long range ADC for Cody would be the ideal situation. The second priority would have to be Meteos’ jungle pick. If Meteos cannot obtain a comfortable champion in the jungle, he may just immediately succumb to Xmithie’s jungle pathing and small jungle skirmishes. Other than that, 100T will definitely have to control Doublelift, whose playoff stats have been off the charts.

Top Players – Cody Sun is always the star of the show for 100T, but credit must also be given to Ssumday and Aphromoo. Ssumday usually does not receive many resources in the top lane yet he manages to have impactful entrances into teamfights and endures lane to the best of his ability. Aphromoo is still a renown support known for aggressive and methodical shotcalling. Despite Cody Sun being the more noticed carry, most of the other players support him from the shadows either directly peeling or providing covering fire as a distraction.

Weaknesses – Early game jungle pressure would be the main worry for 100T. If Meteos fails to exert enough influence on his laners, 100T will have a lot of difficulty out teamfighting TL. The laners will not lose per se, but each lane in the head to head matchup will depend solely on the mechanical skills and experience each player brings to the table.

Coming into this match, Doublelift has had a large life issue that may or may not call his performance into question. That being said, Doublelift also has plentiful experience in his LCS career tackling a multitude of issues from his teenage years to his recent departure from TSM. As such, the coach of TL has declared that Doublelift will indeed be playing in the match on Sunday.

This match will be hard to determine. Both teams are similar in that they both play mainly around their ADCs. However when it comes to team composition, Team Liquid has the edge in their secondary carry of Pobelter and their overperforming ADC of Doublelift.

My best bet: Team Liquid to take the series 3-1 in maps betting, which is paying +260 at BetOnline.