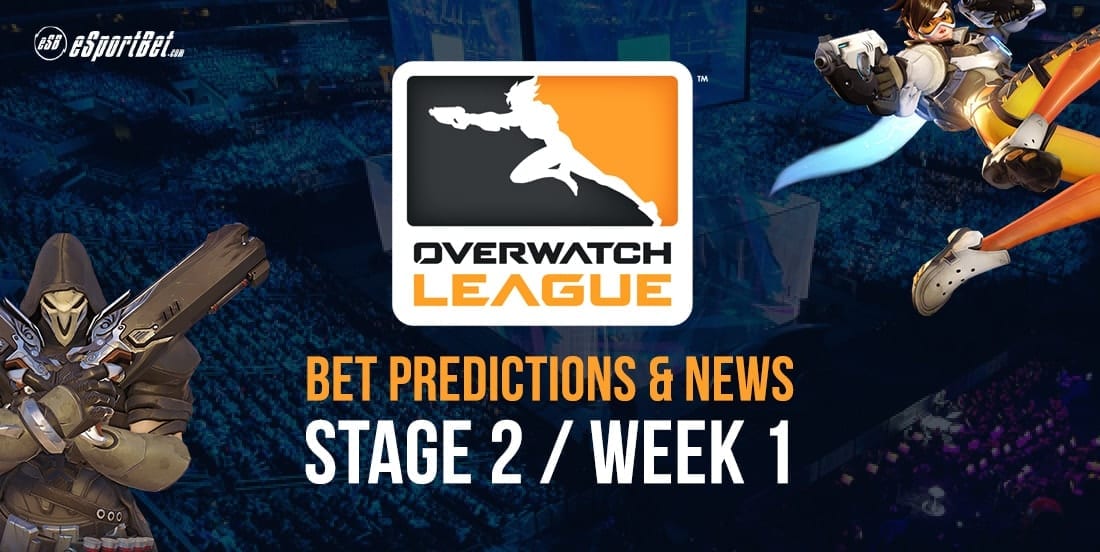 Stage 1 of the Overwatch League is over and we are about to enter Stage 2 (February 21 – March 24). The week 1 matches (February 21-24) of this new stage are looking promising and there are many excellent betting opportunities available. But before I start analyzing the matches, let’s do a short recap of Stage 1 so that you can develop a better understanding of what has happened so far and what the teams are capable of.

The league standings at the end of Stage 1 were the following:

Betting predictions for week 1 of Stage 2

With the next round of matches right around the corner, here are the top predictions and the teams you should be betting on for week 1 of Stage 2:

Dallas Fuel ended Stage 1 with 3 wins and 7 losses, but they’re going up against a team that managed to lose every single match that they played. Maybe the recent player acquisitions can help Shanghai Dragons improve their score for Stage 2, but they still have a long way to go until they can compete against most of the other teams from the league.
Shanghai Dragons is almost surely going to lose this opening match against Dallas Fuel. The previous confrontation between these two teams ended with a close victory in favor of Dallas Fuel (score 3 – 2), and this time the result shouldn’t be any different.

Betting: Bovada puts the odds at around 1.29 – 3.20 in favor of Dallas Fuel, turning this into a worthwhile bet considering the huge probability of success.

Both teams finished Stage 1 with 7 wins and 3 losses, but the direct encounter between them ended with a convincing 3 – 0 victory in favor of Los Angeles Valiant. At the time this result was a huge upset, given that Seoul Dynasty was looking like a contender for the Title Matches. Now however, a similar result wouldn’t be as shocking.
Overall, I’m favoring Los Angeles Valiant to win this time again, even though their opponent is one of the stronger teams in the Overwatch League. Their dominant Stage 1 finish (they ended with 4 consecutive wins) clearly proved that they are on an upward trend and constantly evolving.

Betting: Bovada puts the odds at around 1.57 – 2.20 in favor of Seoul Dynasty, but an upset caused by Los Angeles Valiant is extremely likely here and offers a great betting opportunity.

This is another match between two teams that had a mediocre run in Stage 1. Los Angeles Gladiators finished 8th with 4 wins and 6 losses, while San Francisco Shock finished 9th with 3 wins and 7 losses. The previous encounter between these two teams was decisively won by Los Angeles Gladiators (score 3 – 1). Overall, they go into this match as the clear favorite to take the victory.

Betting: Bovada puts the odds at 1.56 – 2.25 in favor of Los Angeles Gladiators, being willing to offer very high returns for what is likely going to be a very one-sided match.

New York Excelsior was arguably the strongest team in the Overwatch League during Stage 1 and they’re playing against one of the weakest teams in the league in this match. So I fully expect them to crush their opponent without dropping a single map.

Tip: New York Excelsior to win: odds to be announced on BetOnline

Both of these teams finished Stage 1 with 6 wins and 4 losses, but a careful analysis of the individual match results quickly shows that Boston Uprising is vastly better than their opponent. The previous encounter between Boston Uprising and Philadelphia Fusion ended with a decisive victory in favor of Boston Uprising (score 4 – 0). Also, the Boston team won with an identical score an encounter against another strong team which in turn defeated Philadelphia Fusion (score 4 – 0), namely Los Angeles Valiant.

Tip: Boston Uprising to win: odds to be announced on BetOnline

This is a great rematch between two strong teams that already faced each other twice. The first encounter was won by Houston Outlaws (score 3 – 1) while the second one was won by London Spitfire (score 3 – 1).
Going into this match, any of these teams could take the win, although London Spitfire is slightly favored based on recent results. They are the Stage 1 champions, having defeated both Houston Outlaws and New York Excelsior in the Stage 1 Playoffs.

Tip: London Spitfire to win: odds to be announced on BetOnline

These two teams are of roughly the same strength, although Los Angeles Gladiators is slightly more consistent and has a higher ceiling. In their previous direct encounter however, Dallas Fuel won (score 3 – 1). At this match took place in the final week of Stage 1, so the result is still very relevant.
Overall, Dallas Fuel is more likely to win this time again, but not by much.

Tip: Dallas Fuel to win: odds to be announced on BetOnline

This is without a doubt the most hyped match of the week, simply because it’s a rematch of the Stage 1 Grand Final. London Spitfire won that match (score 3 – 2), but many saw their victory as an upset. I thought the same way and I fully expect New York Excelsior to get revenge this time and prove that they’re the best team in the Overwatch League right now.

Tip: New York Excelsior to win: odds to be announced on BetOnline

The skill difference between these two teams is enormous at the moment, and this is also reflected in their Stage 1 results: 7W – 3L for Seoul Dynasty and 3W – 7L for San Francisco Shock. In their previous encounter Seoul Dynasty did struggle against this opponent, winning the match with great difficulty (score 3 – 2). However, that was almost surely an isolated incident caused by a slight tilt on the part of Seoul Dynasty, who had lost some decisive matches against their most important league opponents before facing San Francisco Shock.
Going into this match, Seoul Dynasty is the clear favorite and should win without dropping more than one map.

Tip: Seoul Dynasty to win: odds to be announced on BetOnline

This is a huge mismatch between a team that almost qualified for the Stage 1 Playoffs, finishing with 7 wins and 3 losses, and one that is by far the weakest in the league. An easy victory for Los Angeles Valiant is the only result I can imagine for this encounter.

Tip: Los Angeles Valiant to win: odds to be announced on BetOnline

The skill difference between these two teams is too big for Florida Mayhem to have any chance of standing up to their opponent. Even though they weren’t far from causing an upset against them in their last encounter (which was won by Philadelphia Fusion, score 3 – 2), it’s unlikely that they’ll be able to repeat that performance under a new set of circumstances.

Philadelphia Fusion had nothing to gain from winning their previous match against Florida Mayhem, as it was the very last match of Stage 1 before the Playoffs and the dice had already been cast. So they didn’t try very hard. This time however, they have everything to play for.

Tip: Philadelphia Fusion to win: odds to be announced on BetOnline

These two teams faced each other very recently, during the last week of Stage 1. Houston Outlaws won that match (score 3 – 2) and they’re very likely to win this one too. As I mentioned before in this article, Houston Outlaws had an exceptional Stage 1 finish and they’re almost surely going to impress in Stage 2. Both the team morale and synergy have been great lately, propelling them to excellent results.

Tip: Houston Outlaws to win: odds to be announced on BetOnline