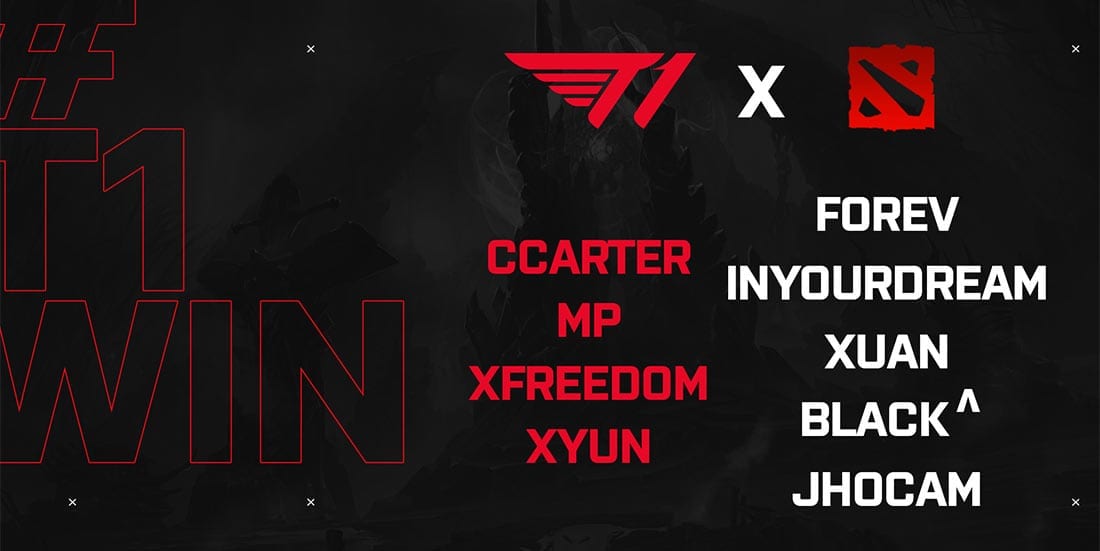 T1 have unveiled their first official Dota2 esports roster, showcasing a quintet of players alongside three coaches and one analyst.

The first signs of T1’s entry into Dota2 surfaced back in August when they signed Lee “Forev” Sang-don. The South Korean organisation officially registered their team at the end of January 2020 and have since attended five events with stand-ins playing alongside Forev.

T1’s maiden Dota 2 tournament was VKGAME BATTLE OF DAWN in October 2019, where they finished in ninth-10th place. In November they took a swing at the Hainan Master Cup and DreamLeague Season 13 SEA Open Qualifier but failed to go the distance, as they finished fifth-eighth and third-fourth respectively. T1 also ran third-fourth at the ESL One Los Angeles 2020 Southeast Asia Open Qualifier in February and most recently competed at ESL SEA Championship 2020 Open Qualifier #1, where they lost to Motivade.Trust Gaming in the final match of their bracket and so failed to qualify for the main tournament.

T1 have fielded a total of eight stand-in players, not counting the four who were eventually offered contracts with the organisation. Some of the most notable stand-in members were veteran Johan “pieliedie” Åström, TNC Predator coach Kim “Febby” Yong-min, and Nicholas “xFreedom” Kelvin Ileto Lim and Pyo “MP” No-a, both of whom have since taken up coaching roles at T1. Hyunjin “Xyun” Choi has been assigned the role of a tactical analyst.

Joining them as the head coach of the team is Choi “cCarter” Byoung-hoon. Although an unknown figure in the Dota2 scene, cCarter won three League of Legends World Championship titles as head coach of SK Telecom T1’s LoL roster.

T1 is excited to finally announce our new international roster for the @DOTA2.

Black^ is one of the most experienced players of the new team and the only member hailing from Europe. The journeyman pro has played in Europe, CIS, China, Southeast Asia and even enjoyed a short stint in South America, but this is his first crack at the Korean esports scene. Joining him as the second western player is xuan, a Chinese-Canadian pro who started his career in 2014 with boreal eSports and has since bounced around a few North American Dota2 stacks.

InYourdreaM and Jhocam are two Indonesian players who previously played together at BOOM ID (now BOOM Esports) from 2017 to 2018. InYourdreaM left the team to play for The Prime, Tigers, EVOS Esports and in July 2019 rejoined BOOM Esports. Although InYourdreaM was an inactive member of BOOM Esports from November 2019 onwards, he has gained renown as one of the best Indonesian Dota2 players and was the first from the SEA region to ever hit 9,000 MMR.

Forev is both the longest standing member of T1’s Dota 2 roster and the most experienced player on the team. He started his career in November 2013 with MVP Phoenix and later played for some big names such as Team Secret, Digital Chaos (now Chaos Esports Club) and J.Storm.

The next test for the new T1 Dota2 roster will come in mid-March when they will compete at the ONE Esports Dota 2 World Pro Invitational Jakarta Qualifier, where Forev and company will duke it out against Tyrants Uprising, Team Oracle and BOOM Esports for a ticket to the main event.