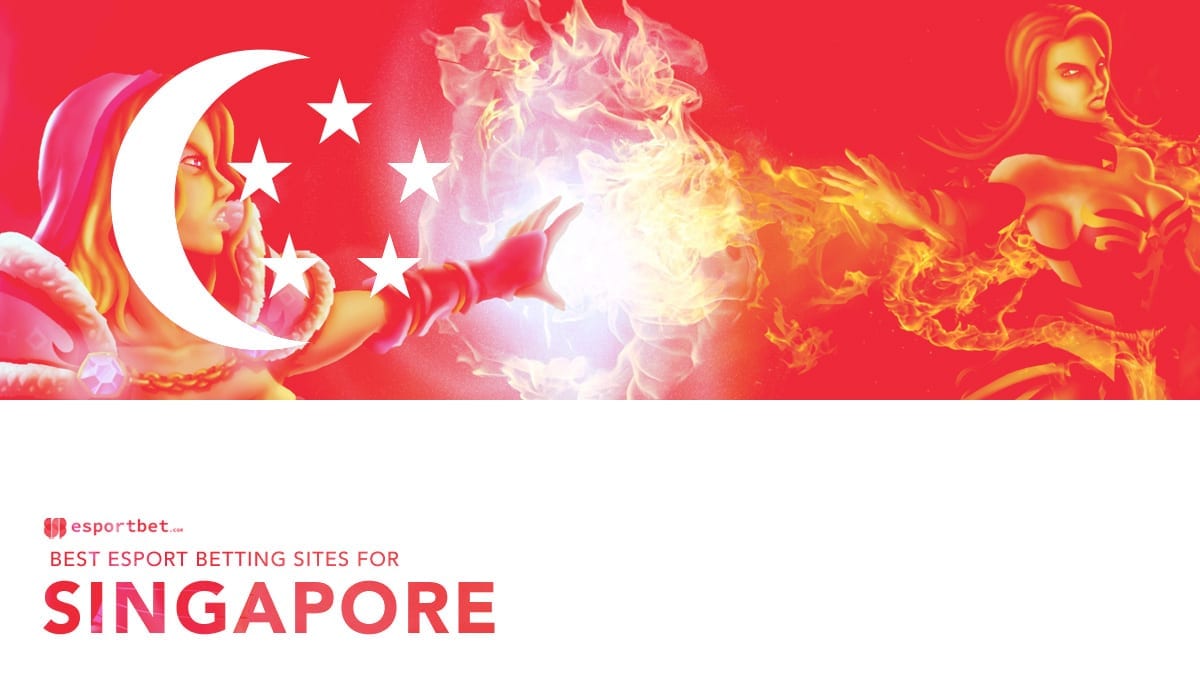 Esports betting is a growing area of the sports wagering industry, with a youth-driven push making betting on professional video gaming a common-practice. Singapore does not have a regulated sports betting industry, although there are many bookmaker sites based in other countries that will accept signups from here and cater specifically to the SGD currency. This page will run you through the best sports betting sites for Singapore, plus give you a rundown of all the major betting esports like Counter-Strike, Dota 2 and League of Legends.

Esports betting is largely done on the top-flight leagues and tournaments surrounding professional video gaming. For instance you might find betting on the final stages of a League of Legends tournament, but you won’t find any markets on the online qualifying. This is because esports handicapping is still a relatively young game, and the depth of the player pools means new esports stars are emerging all the time. Our esports betting section will highlight the top five esports in October, 2021.

The esports calendar is growing all the time, with new leagues and tournaments springing up. Some of the most anticipated esports events for 2020 are:

The Fortnite World Cup burst onto the esports scene in 2019 with a bang, with over 2 million people tuning in for the final stages of the tournament, which were played in a sold out Arthur Ashe Stadium, in New York. Some of the changes expected in 2020 include higher prize money, a different qualification structure to ensure the best players are playing and potentially with trios or squads, instead of solo and duo as it was in 2019.

The League of Legends World Championship is the no.1 event on the LoL calendar. Played between October and November each year, the 2020 Championship finals will be played in Shanghai, where home team FunPlus Phoenix will attempt to defend their crown from 2019. The LoL World Cup is also one of the biggest betting events in esports, with betting sites all over the world offering markets on it.

The Call of Duty League bears an uncanny resemblance to how Blizzard’s star game, Overwatch, launched its league. While the Call of Duty World League has been ditched, this new COD esports competition is set to take the world by storm. Like the Overwatch League, COD League will have teams in 12 US cities, with some franchises already existing, while others are entering into COD competition for the first time. We can’t wait for this one!

How to bet on esports

Before you can start placing wagers on your favourite esports games, you need to sign up with a trustworthy online betting operator. The bookmakers above are fully licensed and regulated, and we recommend opening accounts at all of them so you can compare the odds and ensure top value every time you bet.

The next step is adding money to your account. Esports bookies support a wide range of instant deposit methods, including credit cards, debit cards and e-wallets. Most betting sites also offer welcome packages where new players can pocket hundreds of dollars in bonus cash upon making a transaction, so make sure to opt in if that interests you.

Now it is time to put your money where your mouth is. Navigate your way to the esports section of the website, pick out the game, league, or tournament you wish to bet on, and scroll through the available betting markets. When you want to make a wager, tap the odds to add them to your virtual betting slip. Set your stake, confirm the bet, and you’re good to go.

Singapore’s esports community is only young, but it is growing at a rapid rate. Expect many more top-flight leagues and tournaments to join those below in the coming years.

Web wallet
Neteller and Skrill are staple deposit and withdrawal methods within the online gambling industry.

Direct banking
Direct online banking sevirces such as Citadel Direct are available at most online bookmakers.

Withdrawal options vary from bookie to bookie, so it pays to read up on the terms and conditions for your preferred banking method before you try to cash out your winnings.

Like a lot of places in Southeast Asia, and particularly those with a historical Chinese influence, there is a strong gambling tradition in Singapore. Games of chance are often played in the home and are a common sight at social gatherings such as weddings and funerals.

However, modern-day Singapore is renowned worldwide for its no-nonsense approach to vice and corruption. Just as chewing gum in public can land you behind bars, so too can gambling in the wrong place, with the wrong people, at the wrong time.

In response to what was perceived as a national gambling epidemic, Singaporean government outlawed all forms of remote gaming and wagering in 2014. That legislation was relaxed two years later so the Singapore Turf Club and the Singapore Pools could launch online betting services for horse racing, motor racing, soccer, 4D and Toto, but they remain the only licensed operators in the country.

At present, it is illegal in Singapore to bet with any offshore gambling operator. That raises a problem for gamers who like a flutter, because neither the Turf Club nor the Pools offer betting markets for esports.

The simplest workaround is a virtual private network (VPN), which allows you to escape geo blocks and access just about any overseas betting site. Nothing is foolproof, however, and we stress that any and all online gambling activities are undertaken at the user’s own risk.