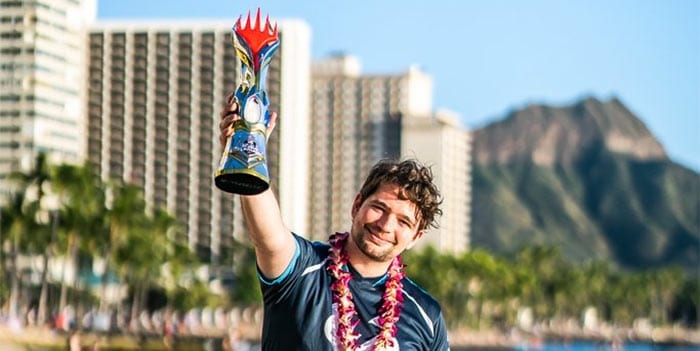 Paulo Vitor Damo da Rosa cemented himself as one of the most successful Magic: The Gathering players of all time by winning his maiden MTG World Championship on Sunday, February 16.

The 26th edition of the Magic: The Gathering World Championship began on Friday, February 14, when 16 MTG pros travelled to Honolulu, Hawaii, to compete at the most prestigious event of the season. Present at the tournament were some of the biggest names in the scene, including the reigning world champion, Javier Dominguez; the 2018 World Cup winner, Jean-Emmanuel Depraz; and Hall of Famers such as Seth Manfield, Raphaël Lévy and Gabriel Nassif.

The 2019 MTG World Championship was the biggest MTG tournament to date. Not only did it feature one of the most stacked fields in its 26-year history, it also featured a record US $1 million prize pool – more than three times as much as 2018 edition’s $300,000 kitty.

The tournament offered plenty of entertainment and no little controversy, namely Andrea Mengucci’s error during the registration portion of the Theros Beyond Death Booster Draft. The Italian pro accidentally registered the wrong card, which earned him an automatic game loss.

“I just received a Game Loss because I registered a wrong card from my Draft,” said Mengucci.

“It kind of stings because I acknowledged it in the checking process after decklists were handed. But as the Latin says: ‘Dura Lex, Sed Lex’.”

I just received a Game Loss because I registered a wrong card from my Draft. It kinda stings because I acknowledged it in the checking process after decklists were handed. But as the Latin says: ‘Dura Lex, Sed Lex’. #MTGWorlds 0-0-1. ?

That mistake proved costly, as Mengucci was eliminated from the tournament on day one. Following his defeat against Thorald Severin, Mengucci defeated Matias Leveratto but then lost to Jean-Emmanuel Depraz in the elimination match. Joining the Italian pro on the scrap heap were Ondřej Stráský, Matias Leberatto, and defending champ Dominguez, who lost to Piotr Glogowski and Stráský.

Day two saw Márcio Carvalho shock the world as he took down former world champion Manfield, while Eli Loveman defeated Nassif to secure a spot in the top eight. Meanwhile, da Rosa fought his way through the lower bracket, where he bested Chris Kvartek and Nassif.

On the third and final day, all games were played in a best-of-three (Bo3) format in standard play. Da Rosa defeated Manfield in round one of the upper bracket and used his Control build to take down Márcio Carvalho in the upper semi-finals, while Manfield bested Nassif in the lower semis.

Carvalho and Manfield then faced in the lower bracket finals, where the Portuguese strategist started strong but failed to deliver in game two as Manfield tied the series at 1-1. The American MTG pro fell flat in game three, where Carvalho produced a remarkable comeback to book a rematch with da Rosa.

Da Rosa was the man to watch heading into the finals, as he had lost only one game en route to the big stage. The Brazilian took game one, but Carvalho was not ready to give in just yet. The Portuguese pro found his footing in match two and tied the series at 1-1.

Carvalho kept pushing his opponent to his limits, but the 2016 world champion came up short in his bid to become only the second player to lift the trophy twice.