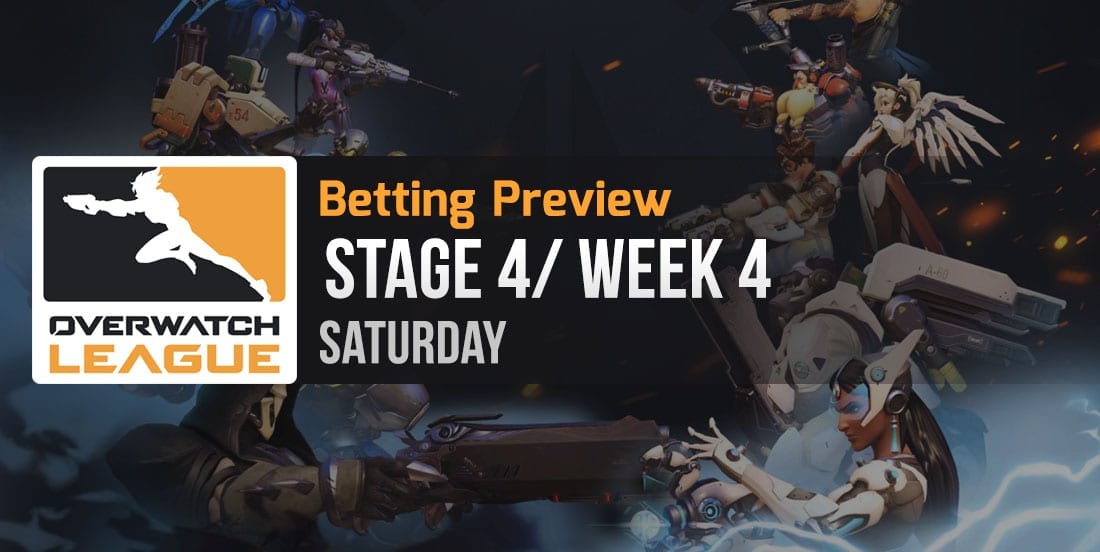 Week 4 of Stage 4 of the Overwatch League is entering its final day and the 3 matches that are left to be played offer some excellent Overwatch betting opportunities. This article analyzes these opportunities and gives you our analysis and betting predictions.

London Spitfire is the Stage 1 champion and has all the ingredients to win, but something is holding it back. In its first match of this week, Spitfire lost a close match against Los Angeles Valiant (score 1 – 2), by far the strongest team in the league right now. Overall, its Stage 4 results have been poor: just 3 wins and 4 losses. Among the defeated opponents I would mention San Francisco Shock and Seoul Dynasty.

Los Angeles Gladiators is absolutely owning right now. Just one loss (against LA Valiant) and 6 wins so far in Stage 4, the latest against the OWL giants from New York Excelsior. Things never looked better for Gladiators, who are now looking to get a top 3 finish in Stage 4 and play in the Title Matches once again.

Betway puts the odds at 3.10 – 1.32 in favor of Los Angeles Gladiators, being somewhat reserved about Los Angeles Gladiators’ ability to totally crush Spitfire in this match. However, based on the team’s recent performances, I think that’s very likely to happen so these higher than usual odds only work in your favor.

No doubt, New York Excelsior is still the strongest team in the league in terms of overall results, in spite of losing its last two matches: 2 – 3 against Los Angeles Valiant and 2 – 3 against Los Angeles Gladiators. Based on their Stage 4 performance and also on the head to head record between these two teams (2 – 0 in favor of Excelsior), New York Excelsior is clearly favorite to win this match.

After transferring in the head coach of Boston Uprising, San Francisco Shock transformed its playstyle and has gotten better and better with every passing week. Its 4 W – 3 L record speaks for itself and we will likely see this team climbing even higher than its current 7th place in the standings table. In Stage 4, San Francisco Shock’s victories came against Dallas Fuel, Houston Outlaws, Seoul Dynasty and Boston Uprising, while the defeats were suffered at the hands of Los Angeles Gladiators, Philadelphia Fusion and London Spitfire.

Betway puts the odds for this match at 1.22 – 3.80 in favor of New York Excelsior. Again, we can see the bookmaker being reserved about the stronger team’s real chances of winning (which are about 95%), simply because of a worrying sign. In this case, the fact that it lost its latest two matches. In reality, Excelsior is almost guaranteed to win this match so these odds are absolutely huge.

Houston Outlaws has had a very good run so far in Stage 4, but it’s highly unlikely that it will manage to beat Los Angeles Valiant, a team that seems completely unstoppable right now. Just last week, LA Valiant took down New York Excelsior in a close match (3 – 2) and is currently sitting on a perfect 7 W – 0 L record.

After a 7 W – 3 L record and a 3rd place finish in Stage 3, LA Valiant upgraded its playstyle and has crushed everyone so far in Stage 4. The team is currently sitting at the top of the league, even though it has already faced some of the other main contenders. Both New York Excelsior and Los Angeles Gladiators fell to Valiant’s might last week, a sign which clearly proves this version of Los Angeles Valiant is much stronger than any of the previous ones.

Last time they met (in Stage 3), Houston Outlaws won the match with a score of 3 – 1. But things have changed a lot since then and it’s unlikely that Outlaws will be able to achieve a positive result against this version of LA Valiant.

Betway puts the odds at 2.95 – 1.35 in favor of Los Angeles Valiant, giving Houston Outlaws a lot of respect, simply because it won its last encounter against Valiant and also because it’s played pretty well so far in Stage 4. In the end though, Valiant should absolutely win this match.