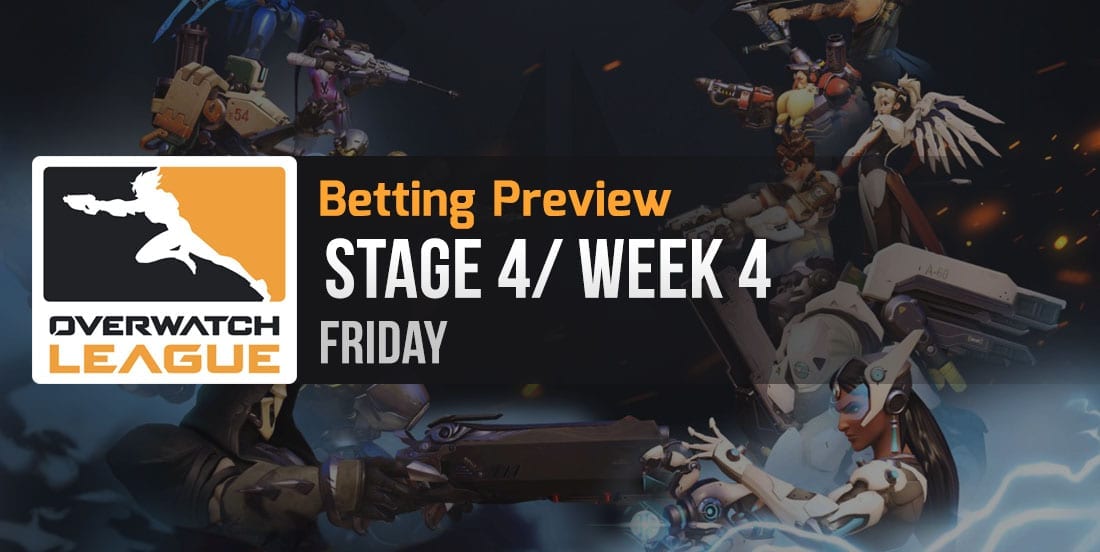 Week 4 of Stage 4 of the Overwatch League is entering its 3rd day and today’s matches offer some excellent Overwatch betting opportunities. This article analyzes these opportunities and gives you our analysis and betting predictions.

Boston Uprising has suffered the most shocking drop imaginable in the last 4 weeks, going from a 10 W – 0 L record in Stage 3 to a current 1 W – 6 L record in Stage 4. I’m not sure how that was even possible for a team that seemed unstoppable for the entire duration of Stage 3, but apparently the loss of its head coach has played a significant role in this. For the time being, Boston Uprising is in complete free fall, but its next opponent will surely make it look like a great team again.

With every passing week, Shanghai Dragons improves its all-time record. And not just for Overwatch, but the entire esports industry. This team has lost its first 37 matches, getting 0 wins so far in the Overwatch League and representing the perfect cash cow for any person with an interest in Overwatch betting. Whatever the odds may be, that is basically free money to be made whenever you’re betting against Shanghai Dragons in a match.

Apart from Shanghai Dragons, Florida Mayhem is the weakest team in the league, and its chances against Dallas Fuel in this match are absolutely 0.

Dallas Fuel seems to have resurrected its roster and playstyle and has performed really well so far in Stage 4, winning against tough opponents such as London Spitfire and Philadelphia Fusion and being ranked 6th in the standings table. Compare that to its 1 W – 9 L Stage 3 performance and you can’t help but be amazed at how much a team can improve in such a short period of time. Fuel’s two losses came against Los Angeles Gladiators and San Francisco Shock, both of them strong teams.

Philadelphia Fusion had a fairly poor run in Stage 3, finishing 8th with a record of 5 W – 5 L. In Stage 4, the team has had a very similar path so far, losing against Los Angeles Gladiators, Dallas Fuel and New York Excelsior and winning against 3 irrelevant teams: Shanghai Dragons, Florida Mayhem and Boston Uprising.

Seoul Dynasty hasn’t done too well in Stage 4, winning just 2 of its matches and against completely irrelevant opponents: Florida Mayhem and Shanghai Dragons. These results don’t tell the whole story though. Throughout the entire duration of the Overwatch League, Seoul Dynasty has been one of the fairly strong teams, finishing Stage 1, 2 and 3 in 5th (7 W – 3 L), 4th (7 W – 3 L) and 7th (5 W – 5 L) place respectively. In Stage 4, Dynasty lost very close matches against strong opponents such as Los Angeles Valiant (2 – 3) and London Spitfire (2 – 3). These close but unfortunate results are a testament to Seoul Dynasty’s strength and ability to hold its own against almost any opponent.