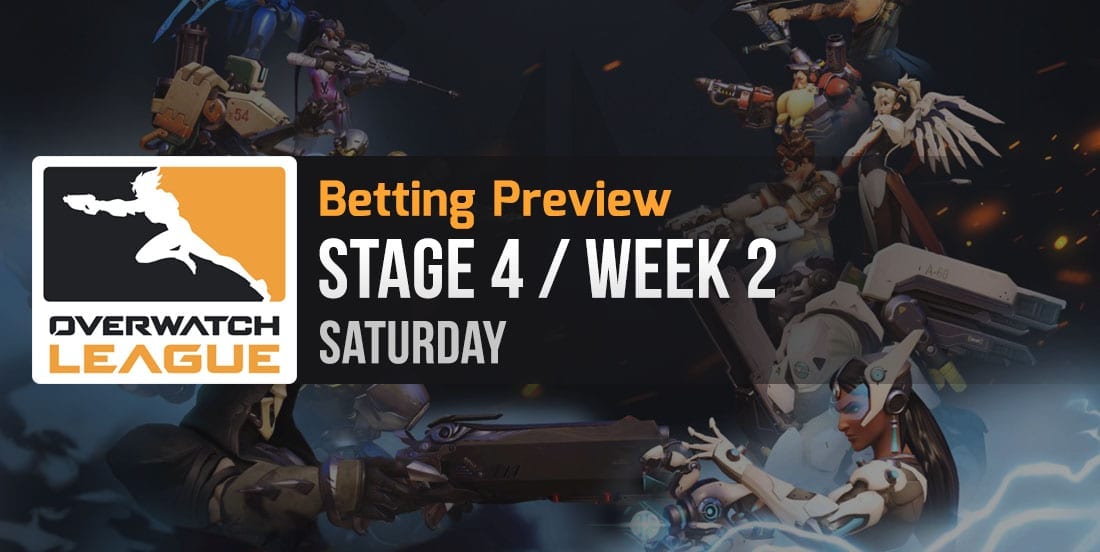 The final day of Stage 4 week 2 takes place Saturday, May 26. As always we have our Main man Kenny R breaking down the 3 games.

Betting predictions for May 26

London Spitfire took a lot of heavy losses in Stage 3, declining from its usual top 3 position down to an average 6th place. However, in spite of this steep decline, Spitfire still managed to get several important victories: against Los Angeles Valiant (currently 3 W – 0 L in stage 4), Seoul Dynasty and San Francisco Shock. In the first 3 matches of Stage 4, London Spitfire lost against Houston Outlaws and New York Excelsior but won against San Francisco Shock.

It seems that every time these two teams meet, London Spitfire knows exactly what to do to emerge victorious. In the previous 3 direct matches, Spitfire demolished Dynasty every shingle time. And I’m sure that it will do so again.

Shanghai Dragons is a record holder for all of esports, having lost 32 matches in a row. And although you might think “well, it’s going to happen one of these days, right?”, the likelihood of that event is extremely low. Shanghai Dragons started Stage 4 with 3 losses against Dallas Fuel, Los Angeles Valiant and Philadelphia Fusion and is almost certainly going to lose this match as well.

Dallas Fuel was a complete disaster in the previous stage, losing multiple key players and finishing with a record of 1 win and 9 losses. The team looked absolutely abysmal and got crushed by everyone except Shanghai Dragons. In the first 2 weeks of Stage 4, Dallas Fuel has won two matches against Shanghai Dragons (so the victory is pretty much irrelevant) and Boston Uprising and has lost another one against Los Angeles Gladiators (a sign that Fuel is probably still a very weak team compared to most of its OWL opponents).

Philadelphia Fusion is a team with a very strong roster and a lot of potential, but the fact that it’s slightly weaker than the likes of New York Excelsior and Los Angeles Valiant often causes it to lose important matches at a 1 map difference. That’s what happened in Stage 3, when Fusion finished 8th with 5 wins and 5 losses. However, the team still achieved great victories against Houston Outlaws and London Spitfire, even though it lost against the stronger adversaries. In the first 3 matches of Stage 4, Philadelphia Fusion won against Florida Mayhem, Boston Uprising and Shanghai Dragons, showing a promising start.

The skill difference between these two teams is huge, so I don’t expect Dallas Fuel to produce an upset in this match.