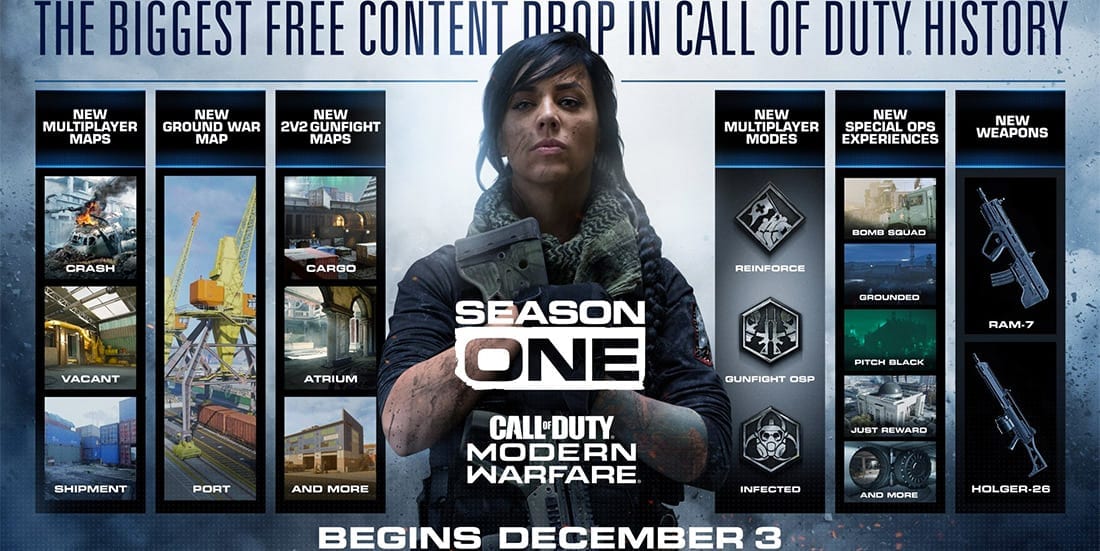 Infinity Ward dropped a huge announcement this Tuesday concerning the first season of Call of Duty Modern Warfare, which will bring with it a major game update.

CoD MW Season One will launch on December 3 and will feature “the biggest free content drop in Call of Duty history”, which will provide the Call of Duty esports fanbase with new maps, remakes of iconic maps, new game modes and new weapons.

The biggest news for long-time Call of Duty fans is the return of some iconic maps that first saw the light of the day in CoD 4: Modern Warfare back in 2007. Crash, Shipment and Vacant are all set to return with slightly tweaked and updated looks.

CoD: MW will also introduce three new maps into the game. Port is the newly announced Ground War map, while Gunfight mode is set to receive two new maps – Cargo and Atrium. Infinity Ward also teased there could be more maps for Gunfight mode on the horizon.

Most exciting of all is the unveiling of three new multiplayer game modes – Reinforce, Gunship OSP and Infected.

Reinforce first featured in Call of Duty: Ghost and was later implemented on Call of Duty: Infinite Warfare for a short amount of time. The game mode is a hybrid of Search and Destroy, Domination, and Search and Rescue. The goal of the game is for one team to capture three flags which are spread across the map and the other to prevent them from doing so. Each player has one life, much like in SnD, but can be revived once their team captures one of the flags. The first team to get to four points (mimicking SnD and SnR) wins the game.

The first season of #ModernWarfare is nearly here. pic.twitter.com/aKp4rkSUZv

Gunfight On-Site Procurement, or simply OSP, will closely resemble the 2v2 Gunfight which is already in the game, but with some small tweaks. Unlike in the current version of Gunfight where players spawn with weapons, OSP will spawn players without any items, forcing them to search for weapons and equipment.

Infected is a well-known game mode which is arguably the most anticipated addition out of all three. The game puts all players into one map and one of them becomes ‘infected’, thus turning into a zombie. The goal of the game is to fight off other players who convert into zombies when killed. The last man standing wins.

The content will go live on all platforms on Tuesday, December 3 and will be free of charge, following the promise made by Infinity Ward after ditching the highly controversial DLC model used in previous CoD titles.

While many fans will be eager to jump straight into all the new content as soon as the clock hits midnight, Activision revealed not all updates will become available straight away.

The developer said in a statement: “Note that some of this content may drop later than the Season One start date of December 3, and additional content may be added to Season One.”