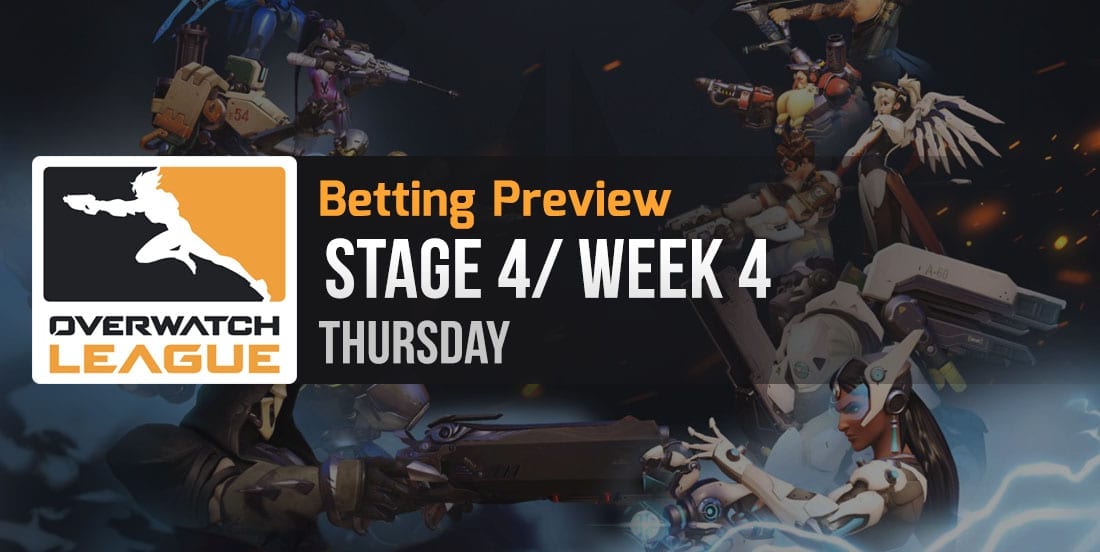 The 4th week of Stage 4 of the Overwatch League is already underway. In this article I will be analyzing the Overwatch betting opportunities for the 3 matches taking place on the 2nd competitive day of this week.

After a good result in Stage 3 (3rd place with 7 V – 3 D), Los Angeles Valiant went full champion mode in Stage 4 and is currently sitting at the top of the league with 6 victories and 0 defeats. In particular, the team’s victory against New York Excelsior from last week clearly proved that Valiant is on a completely different level right now. I’m expecting it to finish Stage 4 in 1st place but then lose the Grand Final of the Title Matches against New York Excelsior.

London Spitfire is the Stage 1 Title Matches winner but in Stage 3, it finished barely 6th with 5 victories and 5 defeats. So far, it seems to be going the same way in Stage 4. Spitfire isn’t a weak team though, and its 3 victories in Stage 3 clearly proved that. San Francisco Shock, Seoul Dynasty and Boston Uprising lost against London Spitfire during the first 3 weeks of this stage.

The recent form and overall performance statistics favor Los Angeles Valiant to win this match. However, these two teams have already met each other twice, and Spitfire won both times with a score of 3 – 2. That makes this match a great opportunity to bet on the underdog. No doubt, Spitfire’s odds for this match will be huge, simply because the team is regarded as a longshot against Los Angeles Valiant. So even a bet with a +1.5 maps handicap on Spitfire will yield really high profits.

After a 4th place finish in Stage 3, Los Angeles Gladiators began Stage 4 at the peak of its powers and has won 5 matches so far. The team’s only loss came against Los Angeles Valiant. Other than that, victories against other strong opponents such as San Francisco Shock, Houston Outlaws and Philadelphia Fusion clearly proved that Gladiators is a top contender in Stage 4.

New York Excelsior is by far the strongest contender in the Overwatch League in terms of overall results, having a record of 32 V – 4 D. Last week, Excelsior lost against Los Angeles Valiant in a very close series but is still much stronger than any other team in the league. So I don’t see how Gladiators could overcome this hurdle and actually upset the established order.

The two previous matches between these two teams ended with 2 New York Excelsior victories. Furthermore, Excelsior has performed much better than Gladiators throughout the entire duration of the Overwatch League. That clearly suggests that it’s the favorite here and by a lot, in spite of the current identical Stage 4 record: 5 V – 1 D for both teams.

After bringing in Boston Uprising’s head coach, San Francisco Shock made some serious improvements and is now sitting in 4th place with 4 victories and 2 defeats. The victories came against Seoul Dynasty, Houston Outlaws, Dallas Fuel and Boston Uprising, while the defeats came against Los Angeles Gladiators and London Spitfire.

Philadelphia Fusion finished Stage 3 in a modest 8th place with 5 victories and 5 defeats. For the time being, the team seems to be headed towards a similar result. In Stage 4, Fusion won against 3 irrelevant opponents (Boston Uprising, Florida Mayhem and Shanghai Dragons) and lost against Dallas Fuel, New York Excelsior and Los Angeles Gladiators. It seems that every time it faces a strong team, Fusion has a high chance of choking. Because of that, I fully expect San Francisco Shock to win this match.

The latest match between these 2 teams took place in Stage 3 and ended with a clear victory in favor of San Francisco Shock (score 3 – 1).