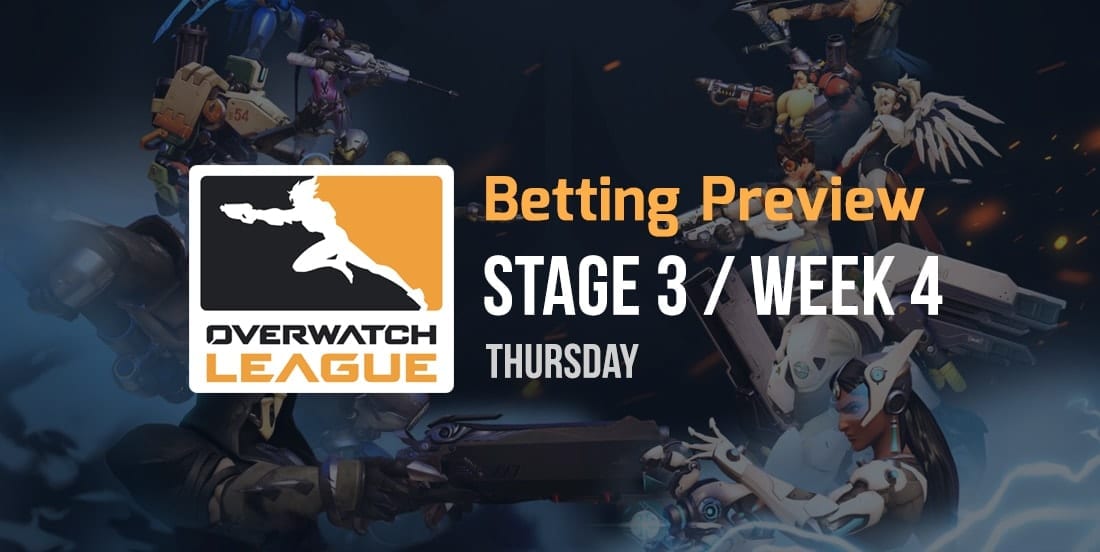 The action from the Overwatch League resumes Thursday. As always Thursday is set to have three great games in store for us and of course, that means three more chances to run that bankroll up.

As always we will have our Overwatch guru Kenny R walk us through Thursday’s games.

Los Angeles Gladiators had a bad start in Stage 3 and suffered a shocking defeat at the hands of San Francisco Shock. But then it went on to win against Dallas Fuel, Shanghai Dragons and even Seoul Dynasty. Last week however, Gladiators lost two big matches, against Los Angeles Valiant and New York Excelsior. However, both of these matches were very close (score 2 – 3), proving that the team is deceptively strong in spite of its mediocre results.

London Spitfire is not doing too well at the moment, although it won last week against Los Angeles Valiant, a team which in turn had defeated Los Angeles Gladiators the exact same week.

Overall performance throughout the Overwatch League favors London Spitfire. The head to head results between these two teams favor Los Angeles Gladiators (1 – 0). Stage 3 statistics favor Gladiators as well. All things considered, I still think that Spitfire will win this match. And that’s because of the great form they showed even in their defeats against the top teams. They practically almost always came close to winning and only lost the match in game 5.

New York Excelsior is the strongest team in OWL in terms of overall results, and is also in excellent shape at the moment, sitting at number 3 in the Stage 3 standings table with 5 wins and 1 loss (against Boston Uprising).

Although they somehow lost 3 matches so far in Stage 3, Philadelphia Fusion is still a much stronger team than Seoul Dynasty at the moment and will likely win this match without too many problems. Seoul Dynasty has a few things going in its favor (overall performance and head to head results), but its recent form has been disastrous. Meanwhile, Philadelphia Fusion has proved its strength even against the top teams.