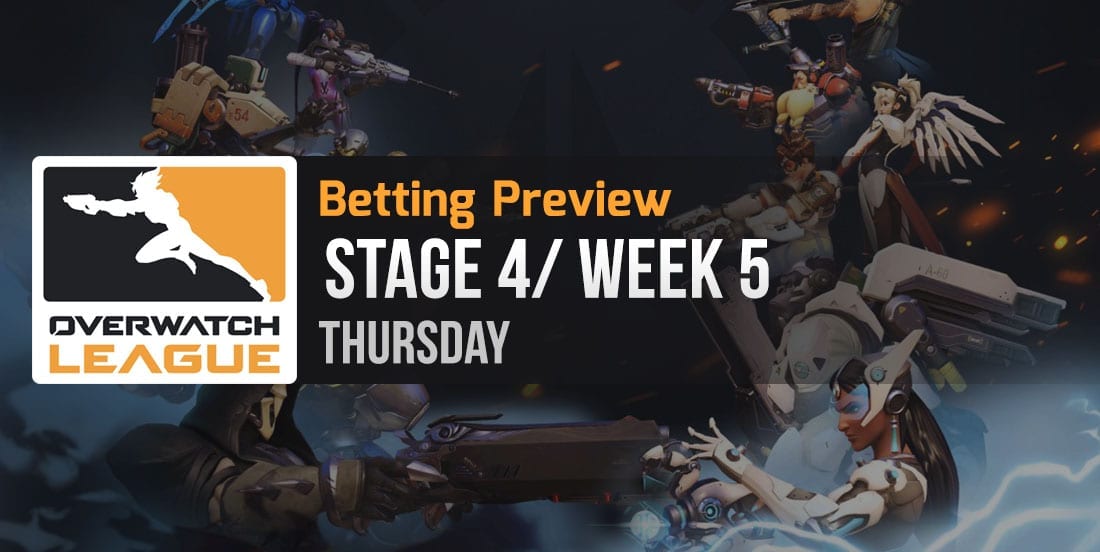 The 5th and final week of Stage 4 of the Overwatch League is already underway and the 3 matches taking place on its second day provide some excellent Overwatch betting opportunities. This article takes a look at these opportunities but first, let’s see what the teams have done so far in this stage.

Houston Outlaws has had a fairly good run so far in Stage 4, defeating teams like London Spitfire and Dallas Fuel in the process. Its defeats came against the current top 3 teams in the league (Los Angeles Valiant, Los Angeles Gladiators and New York Excelsior), so no surprises there. Overall, Outlaws looked capable of holding its own against most adversaries, but still got completely crushed by the really strong teams.

Philadelphia Fusion had a fairly poor run in Stage 3, finishing 8th with a record of 5 W – 5 L. In Stage 4, the team has had a slightly better run so far, losing against Los Angeles Gladiators, Dallas Fuel and New York Excelsior and winning against the likes of San Francisco Shock and Seoul Dynasty.

In terms of overall performance throughout the Overwatch League and recent form, these two teams are of similar strength. However, in their previous 3 direct encounters, Philadelphia Fusion won every time (score 3 – 2).

Betway puts the odds at 2.55 – 1.45 in favor of Philadelphia Fusion, clearly expecting a victory in their favor but still giving Houston Outlaws a lot of respect. I believe this assessment is almost precisely correct, but the odds should have been higher on Fusion’s part. That’s because the chance of a Houston Outlaws victory is higher than what these odds reflect.

Apart from Dragons, Florida Mayhem is without a doubt the second weakest team in OWL. Its abysmal 7 V – 31 D record, which is actually a 3 V – 31 D record (because 4 of those victories were against Shanghai Dragons) clearly suggests that it has absolutely no chance against the stronger teams. And London Spitfire is definitely one of them, in spite of its poor recent form.

London Spitfire is the Stage 1 champion, but the team has lost a lot of its prowess since then. In Stage 3, Spitfire finished in 6th place with a record of 5 W – 5 L. Stage 4 hasn’t been any easier for this team, which is now standing at number 8 with 3 victories and 5 defeats. The only important team defeated by London Spitfire in Stage 4 was San Francisco Shock. At the same time, Spitfire’s defeats came against key opponents such as New York Excelsior, Houston Outlaws, Dallas Fuel, Los Angeles Valiant and Los Angeles Gladiators.

Every type of indicator points towards an easy London Spitfire victory in this match.

Betway puts the odds at 7.00 – 1.07 in favor of London Spitfire, and this is practically free money to be made.

New York Excelsior is easily the best team in OWL in terms of overall performance, sitting on a record of 33 V – 5 D. Two of those 5 losses took place in Stage 4, against Los Angeles Valiant (2 – 3) and Los Angeles Gladiators (2 – 3), but Excelsior is still one tier above almost every other team in the league right now. So a defeat against Boston Uprising in this match is very unlikely.

Boston Uprising has suffered the most shocking drop imaginable in the last 5 weeks, going from a 10 V – 0 D record in Stage 3 to a current 2 V – 6 D record in Stage 4. I’m not sure how that was even possible for a team that seemed unstoppable for the entire duration of Stage 3, but apparently the loss of its head coach has played a significant role in this.

Betway puts the odds at 1.10 – 5.75 in favor of Excelsior, giving Uprising a lot of undue respect.