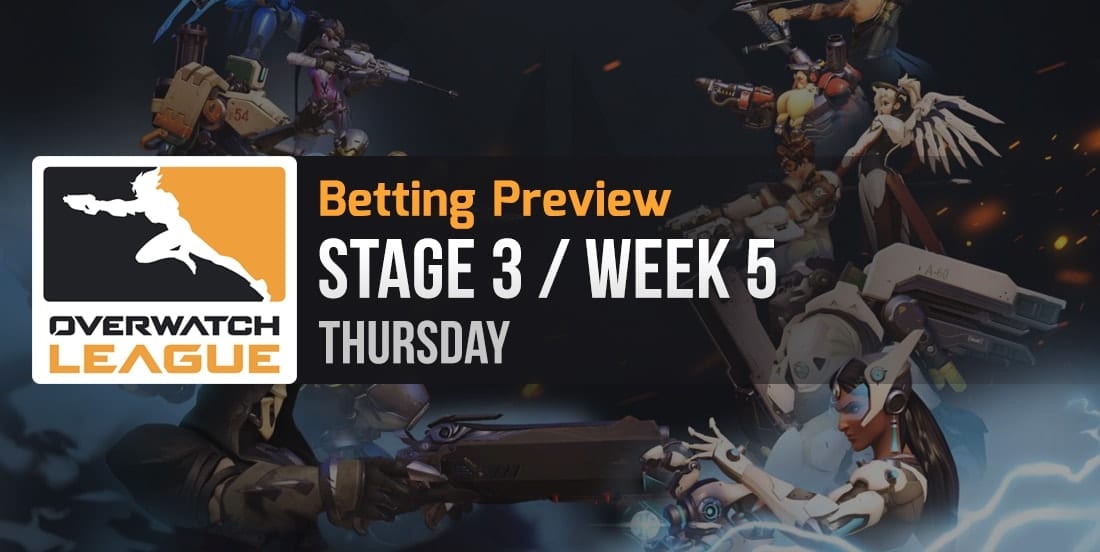 Without a doubt the highlight of Thursday’s Stage 3, Week 5 Overwatch League action is the battle between the undefeated Boston Uprising and the Los Angeles Valiant, who have dropped just two matches this split.

Our Overwatch League expect Kenny R has previewed all the matches and gives his free predictions.

This will be an interesting encounter between two teams that used to share adjacent spots close to the bottom of the standings table. In Stage 3 however, San Francisco Shock went through a bit of a Renaissance, winning against the odds a few times and amassing more victories than anyone expected. At this point, San Francisco Shock is a considerably stronger team than Florida Mayhem and should win this match win relative ease.

Nobody can stop Boston Uprising at this point. With every passing week, Uprising is proving more and more clearly that its recent form is its real form. The team has changed a lot after Stage 2 and is now the strongest competitor in the league. Arguably, Boston Uprising has already faced the toughest opponents with the exception of Los Angeles Valiant, whom they will encounter this week. If it wins that match, Boston Uprising, will almost certainly be the first team to finish a stage in OWL without losing a single match.
Currently sitting at number 3 in the standings table for Stage 3, Los Angeles Valiant has had an excellent run so far, defeating teams like Seoul Dynasty and Los Angeles Gladiators. Its two defeats came against London Spitfire and Houston Outlaws. Valiant’s current spot in the league might be quite deceptive, due to its many victories against very weak opponents. We’ll have to see how the team performs this week against Boston Uprising and Philadelphia Fusion. In all likelihood, it will get crushed by the first and then win against the second.

New York Excelsior is the strongest team in OWL in terms of overall results throughout the entire competition. In Stage 3, Excelsior has managed to beat everyone so far with the exception of Boston Uprising. Their opponents were pretty strong for the most part, so most of the victories are totally relevant for assessing Excelsior’s true strength. In all likelihood, we will continue to see great performances from this squad. Given that New York Excelsior’s final two opponents will be Dallas Fuel and Shanghai Dragons, it’s almost a certainty that they’ll finish Stage 3 with a 9 – 1 record.