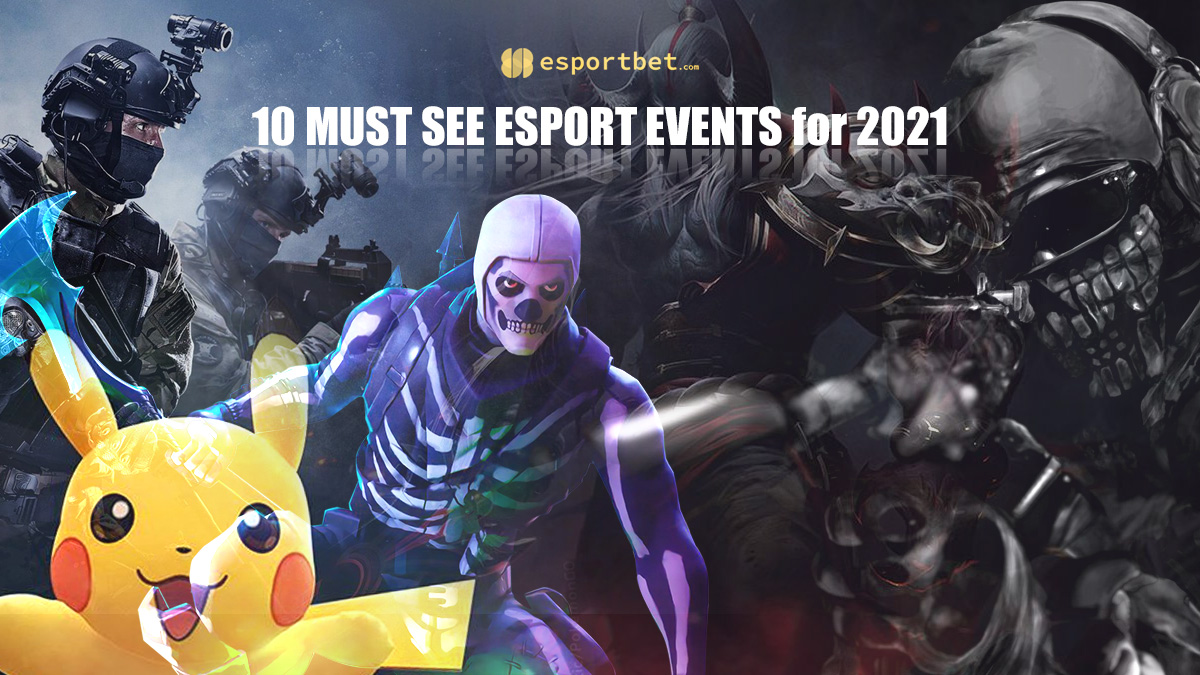 There was a slight decline in the number of eSports events throughout the world in 2020. However, despite the widespread of covid-19, many eSport event organizers canceled physical events with some resorting to hosting these competitions purely online or in bubbles. With the decline in new cases, many of the previously canceled events have been brought back. That said, these are the 10 eSports events you should not miss in 2021.

One of the most anticipated e-sporting events, the League of Legends World Championships is scheduled to take place in Shenzhen, China later this year. This will mark the second time China is hosting the event, after successfully hosting last year’s events despite everything that was going on in the world. However, unlike previous years, last year’s event took place in a a bio-security bubble as a precautionary measure. With last year’s first rounds of the tourney taking place within a bubble and with no attendees, this year’s event might follow a similar format. Depending on how things are at the time, the first rounds of the game are expected to take place in different cities before finally returning to Shenzhen.

For many years, the Capcom Cup has been one of the most anticipated eSports events. While the SFL World Championship Finals feature teams from only two countries, the CapCom Cup features more than 18 players who qualify for the event after winning their respective regionals. The three-day tournament will take place in late February in the Dominican Republic, which also happens to be the home country of former Capcom Champion, MenaRD. Every year, the best Streetfighters in the world, square off in what many have termed as the ultimate brawl. With $120,000 up for grabs, Capcom Cup not only promises sheer excitement but also ultimate moves and counter moves from the participants.

The M2 World Convention will premiere in January and it’s expected to reach up to 400 million viewers worldwide. Organized by Chinese gaming giant, Moontoon together with Online Gaming Association and Cybersports, the event will feature various teams who will battle it out for the $300,000 prize money. While the event will be held behind closed doors, fans will get to watch their favorite teams square off online. The group stages will take place from January 18-20, while the playoffs will take place two days later from January 22-24.

While the first edition of the FIFA eWorld Cup took place back in 2004, the tournament has slowly transcended into one of the biggest esports events in the world. The creme de la creme of the e-sporting world square off every year for the biggest prize of them all. One of the largest and most anticipated events of the year, the Fifa world cup features a prize pool of $500,000 and $3million in prizes. The first-ever Fifa World Cup took place in 2004 in Zurich, Germany, and ever since then, the event has taken place in different locations throughout the world.

Ever since it was launched, Fortnite has grown into one of the most popular games thanks to its free to play model. During its first year in the market, Fortnite attracted more than $125 million players and amassed a whopping $1.2 billion in revenue. To celebrate its birthday, Fortnite hosted a huge extravaganza now dubbed the Fortnite World Cup. Organized yearly by EPIC gaming, the Fortnite World Cup is the biggest gaming event of the year with a prize pool of $30 million. Participation in the Fortnite World Cup is purely on merit as the organizers do not sell any teams or franchises.

With a $2 million pool prize, Call of Duty Championship hosts 32 teams from North America, Asia, and Brazil every year. Spanning for 4 days, these teams square off against each other, until a winner is found. In the past few years, the Call of Duty Championship has presented some of the most clutch plays ever in FPS gaming. Due to Covid 19, the championship will take place online via PC, unlike the previous seasons where teams squared off via the PS4 console.

After breaking viewership records in its debut year, Call of Duty World Championship has grown into one of the largest FPS events in the world. While many enthusiasts hoped that the organizers would expand the tourney by introducing new teams that appear to be not the case. The same 12 teams that battled it out last year, will take it out on each other once again this year. Played on Black Ops Cold War, the participating teams will attend all the events in the series before the top eight teams advance to the championship stage.

Founded in 1996, the Evolution Championship Series is undeniably one of the oldest esports gaming events. Exclusive for five teams, the Evolution Champion Series has always taken place in Las Vegas with its main focus being on fighting games. The tournaments in this series are exclusively open and tend to follow a double-elimination format. While the event was briefly canceled due to Covid-19 back in 2020, the organizers have released a new schedule for 2021, with the open tournaments taking place from July 18.

The 17th edition of the invitation-only tournament is scheduled to take place in August this year. With the tournament taking place in London, England this will be the second time that the annual event does not take place in the United States. Like last year’s series, the 2021 Pokemon World championship series will follow a similar pattern including the three age divisions; junior, senior, and masters division. Moreover, the series will run for four consecutive days

The CSGO World Championship games began in 2013 and are all sponsored by gaming giant Valve. With a prize pool of $1,000,000, these championship games attract the best of the best in the world. While the CS Major Championship Spring was scheduled for May, it was canceled due to various reasons. Nonetheless, the CS: Go Major World Champions Fall is still scheduled to take place later this year in Europe. During the championship stage, all teams will participate in a single-elimination bracket, with the winning teams progressing to the quarterfinals then to the semi-finals of the games. Like most esports events, the prize pool money will be shared among the teams with the winning team pocketing $500,000 while the runner’s up pockets $150,000.

Scheduled to take place in March this year, the GT Challenge and GT Pro series will feature 30 racers all aiming to have a share of the $18,000 prize pool. The GT Pro series will feature the most experienced drivers while the GT Challenge will serve as the feeder to the main series. The winner takes home $3500, while the second team takes home $2000. Gran Turismo has long been one of the most popular console games in the world and has sprung many surprises over the journey, with amateurs often beating home the pros.

All of the top esports betting sites will feature markets on the major events taking place in the professional video game realm in 2021. These include major players like bet365 and William Hill, while US fans can check our guide to esports betting in the USA.