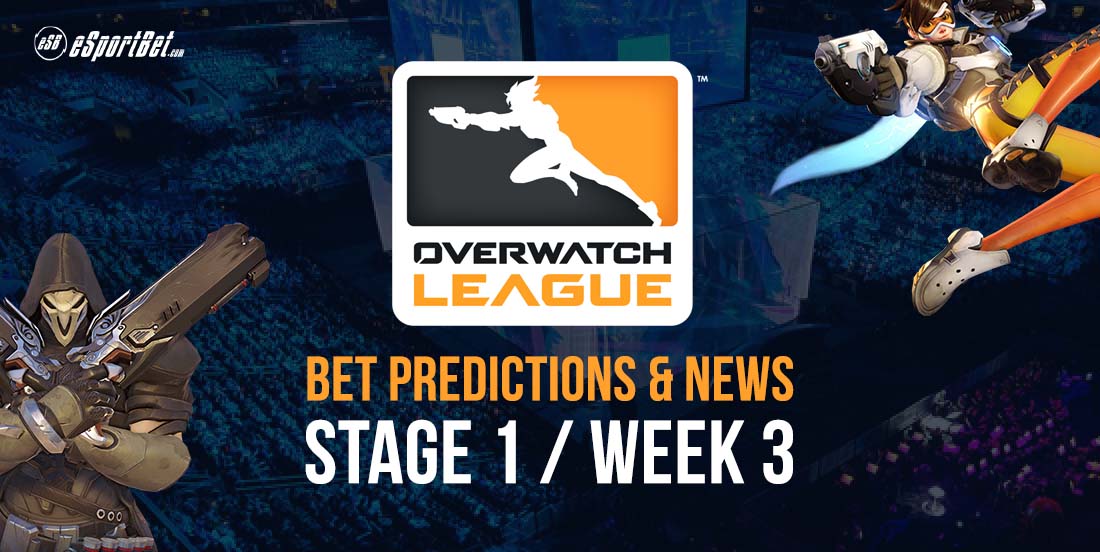 The third week of Overwatch League is almost upon us.

The current status quo is about to receive a shake-up, with Seoul Dynasty and New York Excelsior finally scheduled for a clash of the ages.

We also expect some enthralling play from Houston Outlaws and San Francisco Shock as they continue their slower rise in the ranks this week.

Here are our top weekend match picks for Stage 1, Week 3 of the Overwatch League’s first season.

New York Excelsior also wiped the floor with Los Angeles Gladiators and Valiant, with superstar Kim ‘Pine’ Do-Hyeon showing his versatility on both dive and flanking.

While the 4-0 sweeps were expected, the competition for both teams was one-sided, so this week’s clash will finally give us a glimpse into which all-Korean roster reigns supreme.

As much as we love Pine’s multi-kills and high-light reels, the other side of the fence might just prove too much for him and support player Bang ‘JJoNak’ Seong-Hyun, who will have to step up his Zenyatta defense tenfold.

Kim ‘Fleta’ Byung-Sun absolutely suffocates the opposition with his Widowmaker sharpshooting and only seems to be getting better every match, Je-hong ‘Ryujehong’ Ryu showed his support flexibility with Mei and Zenyatta, and even their tank player Kim “zunba” Joon-Hyeok was able to wreak havoc.

Expect a thrilling match that will let us see how Dynasty handles a real challenge, but their talented roster vastly outnumbers NYXL’s best so far.

Dallas Fuel’s performance as a team last week was quite frankly, embarrassing, and leaves us little hope they will come back firing against the Shock.

Whether it was impatience or panic, they literally fell apart to the Houston Outlaws and instead of adapting to the unexpected aggro, doubled-down on their ineffective team composition.

The Shock have copped fair criticism for their composition inconsistency in the past, but they showed a lot more adaptability to secure their stunning win over Boston last week.

Andrej ‘Babybay’ Francisty and Dante ‘Danteh’ Cruz are great DPS leaders and shot-callers and we were impressed with BabyBay leaving the comfort of his McCree to reign the skies as Pharrah and throw off Boston for a crucial win.

As it stands, we think the Shock have shown continuous improvement and are more than capable of taking out the overrated Fuel line-up, so long as they can keep the own real consistent threat on the other side – Hyeon ‘Effect’ Hwang – in check.

The LA Valiant are our favourite team to watch when it comes to coordinated dive comps and clutch plays.

Whether it’s Terence ‘SoOn’ Tarlier sweeping through as Tracer or Brady ‘Agilities’ Girardi saving the team from a game-ending ult combo with a well timed Roadhog hook, these guys play well and adapt on-the-fly.

While they had some heart-breaking defeats last week, LA took both Spitfire and NYXL right down to the wire and proved they’re capable of providing the all-Korean teams a genuine challenge.

Against Florida Mayhem, the second-worst team in the League with the smallest roster and poor synergy, the Valiant have this one in the bag.

Houston Outlaws finally found their groove when they took out Dallas Fuel last week to leave everyone genuinely gobsmacked with how well they’ve improved.

DPS duo Jacob ‘Jake’ Lyon and Jiri ‘Linkzr’ Masalin were monsters out on the field, with Jake proving to be an amazing Junkrat leader and Linkzr giving Dynasty’s Fleta a potential run for his money with his exceptionally clean 10 kill streak as Widowmaker.

The LA Gladiators, too, improved as we predicted, pulling out a clutch at the last minute to take out a stunned Philadelphia Fusion on a fifth map.

Easily the hardest pick this week given how well both have played against teams in their own skill-level, but Houston goes in with more momentum from their two victories and the more significant improvement in communication, support and defensive choke-holds.

Where can I watch the Overwatch League?

Check out our guide on the best Overwatch League live-streaming sites to find out how and where to watch OWL matches on your desktop computer or mobile device.