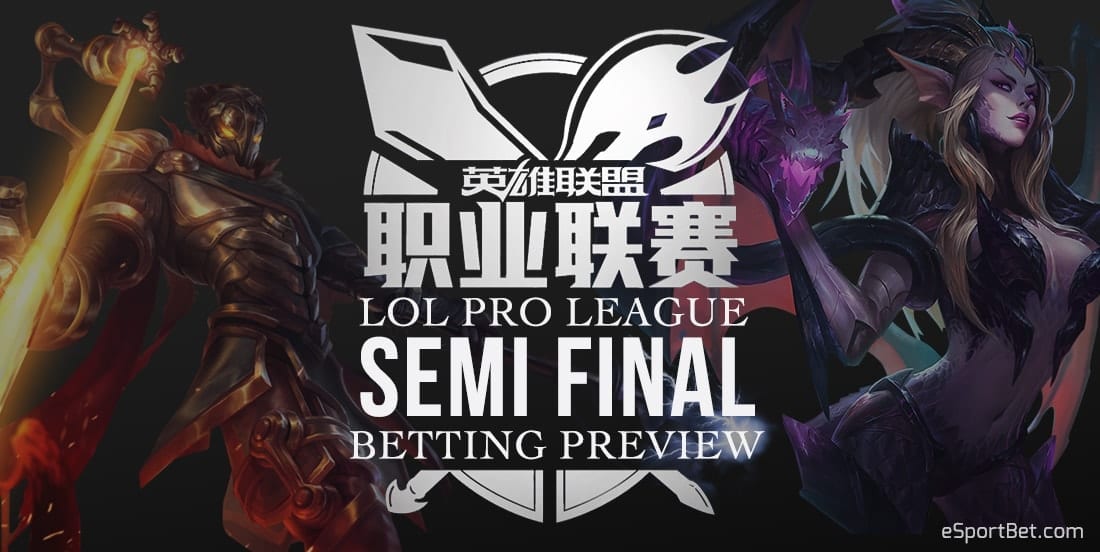 The LoL Pro League is the last major region to lock in a representative for the LoL Mid Season Invitational and this week will unfortunately not be the decider of the role. However, the top four teams of Royal Never Give Up, Invictus Gaming, EDward Gaming and Rogue Warriors will duke it out for a chance to show China which team reigns supreme.

With three groups making it out of the East Region and only EDG to represent the West, China’s semi finals matches will be taking place in LGD Gaming Center in Hangzhou. After this week, the third place match and finals will be held at different venues, Chongqing Expo and the Chengdu Magic Cube respectively.

MORE TIPS: ESPORTS PREDICTIONS
GUIDE: HOW TO BET ON LOL

Royal Never Give Up vs Invictus Gaming

The first semi final match is between the two titans of Royal Never Give Up (RNG) and Invictus Gaming (IG). Invictus Gaming is coming off a stellar season, going 18 wins and 1 loss. RNG however is coming off a season where they had an above .500 win ratio, but nowhere near the record of IG. The best part yet – that one loss that IG sustained was from RNG in the regular season.

IG has a great roster that includes staple ace players such as Rookie and Ning in the mid and jungle. Baolan and JackeyLove are making a name known for themselves in the botlane with excellent KDAs and mapwide rotations, although their kill percentages are lacking compared to the rest of the league. Duke, a former SKT top laner, is taking over for TheShy who is out injured. Based on the few games he has played, we will have to see whether or not he can gel with the team. IG’s memo is a more balanced team composition that requires an objective focused playstyle with heavy emphasis on teamfighting. This is reflected in each individual player’s KDA and Gold Share (GS). So far, it has netted them the favorite team to win the tournament.

RNG has had a great playoff run to get to the semifinals, winning 3-0 against Team WE and 3-1 against Snake. Possessing arguably the more known players of the teams, the biggest talk has to be Uzi who is a renown ADC across all regions. Xiaohu in the midlane, MLXG and Karsa in the jungle, and Letme and Zz1tai have all made headlines as some of the most famous players for each role. As substitutions go, the more played of top and jungle are Letme and MLXG. Defeating RNG will heavily depend on whether or not Uzi can hard carry and if he does not, RNG will depend on a win lane win game strategy. Every single player is stepping up for playoffs, but defeating IG will be an uphill battle.

IG may have a substitute player in Duke, but Duke does have his pedigree as a former SKT T1 player. The battle will be in favor of IG in a 3-1 fashion despite the fact that both teams are quite volatile, even during the regular season. The botlane and jungle pressure difference is the main focal point of this match and the longer the series goes on, the more difficult it will be for RNG to maintain focus.

The second match of the week will be between EDward Gaming and Rogue Warriors, the former taking the first seed of their group while the latter taking the second seed. That being said, as head to head matchups go, EDG has lost to RW 0-2. EDG’s record is actually worse than Rogue Warriors’ with RW’s total number of games being quite a bit lower than most teams. That means RW will close out most series in a faster manner, something that can easily be seen as a double edged sword.

EDG has struggled in the regular season even with veteran name such as Meiko, iBoy and Clearlove who is currently a substitute. However, EDG does strictly follow the meta when it comes to champion selections, barring iBoy’s famous Kog’maw. The win condition for EDG would be to assist both iBoy and Scout to mid game power spikes so that teamfights will come out in favor of EDG. It is a blessing that their top laner Ray has such a large champion pool to play with so that top lane versatility is a benefit.

Rogue Warriors on the other hand also has a handful of well known players including Smlz, Mouse, Flawless and Doinb. Each player individually does not stand out necessarily but their playstyle is similar to EDG in that they adhere strictly to meta champions. That being said, teamfighting is also the gameplay of RW, and the battle will definitely become the jungle/mid/bot fights rather than the top lane, as both top laners have a severely lower KP% than most players. However, the main focus will be if Flawless can match up to Haro’s jungle pressure.

When matchup up side to side, EDG and RW are incredibly similar in playstyle, champion pools and win percentages. However, EDG will have an edge this weekend in a 3-1 victory because of RW’s sloppy quarterfinal match coming into this week coupled with the fact that EDG was on an upswing during the latter parts of the split while RW were on a downswing.