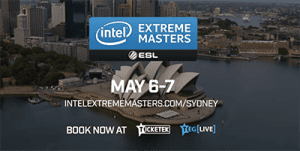 Many international eSports teams will be flying 24 hours or more to attend Sydney’s first Intel Extreme Masters (IEM) event with $AUD260,000 up for grabs.

Running from May 6 to 7, the global pro gaming tour which has been running for more than a decade will take place for the first time Down Under at Qudos Bank Arena.

Australia has not been a prominent destination for eSports compared to Europe, Korea, China and North America. But this weekend will bring together the best eSports teams at Counter-Strike: Global Offensive.

It is important for the country to get on the eSports radar while it still can – the industry is expected to be worth more than $US1 billion by 2020, according to the NewZoo 2017 Global eSports report.

Australia does have a strong eSports following but is only just starting up. Still, many organisations, including the Australian Football League, are interested in the potential growth as well as the ability to attract millennials – a market reportedly difficult to target.

Additionally, with hundreds of millions of people watching, players are becoming a new kind of celebrity who can earn as much as professional athletes.

The players earn big bucks from sponsorships, similarly to sporting codes, as well as streaming revenues and shared prize pools. Game developers, such as Intel, as well as tournament organisers and sponsors, all fund the player’s salaries.

Reportedly there isn’t enough money behind the Australian branch for eSport organisations to support players just yet, but this could be about to change.

Additionally, Australian professional eSport players can only earn up to $25,000 a year, compared to the seven figures Korean and European eSports professionals are making.

This is because tournament prize money ranges from $10,000 to $45,000 in Australia. The biggest prize in the country for an eSports tournament so far is $55,555, which is quite small compared to the million-dollar prize pools on the other side of the world.

The largest prize pool ever recorded was at the Dota 2 2016 International Championship Tournament which had a shared prize pool of $US20 million.

While not in the multi-millions, or even millions for that matter, the IEM event in New South Wales means Australia is making progress since the prize pool has increased from five figures to six.

When it comes to Australian eSport players, the majority do not play full time as they are university students who have been learning since high school. However, some of the best do train at special facilities for 10 hours a day.

As with any professional sport, eSports is not a stable career path, and only the best will make it by training consistently and sacrificing socially or through their education. To become a top player and compete all over the world a gamer needs to give up a huge part of their life to learn the skills.

But many top Australian eSports players have said it is worth it as professional video gaming offers benefits, such as teamwork, communication and emotional intelligence skills.

Australian gamers will no doubt be hoping this weekend’s IEM event will only fuel the eSports industry Down Under and encourage more sponsors and organisers to get involved.

If you’re interested in attending, you can buy day tickets with prices starting at $59, or weekend tickets for $119. Both options will get you access to the Qudos Bank Arena, open signing sessions with pro players and more. Head here for more information.