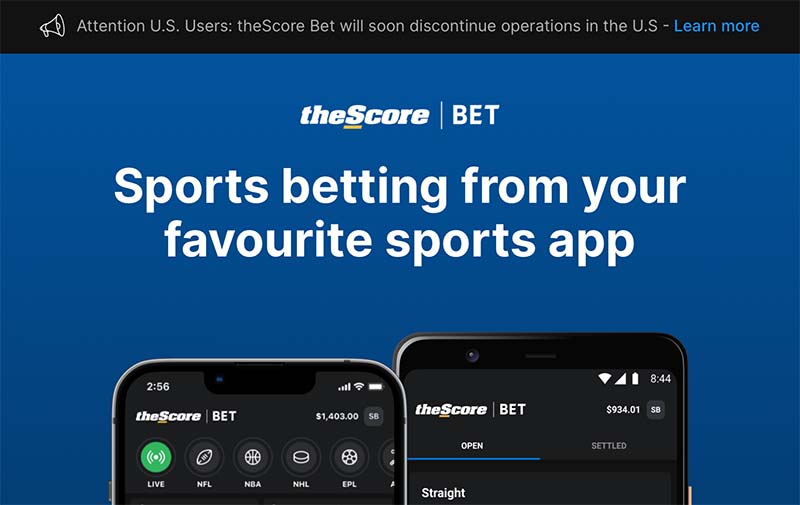 Toronto-based betting brand theScore has announced its plan to stop operations in the United States, effective from July 1.

theScore was acquired by the Penn National Gaming group last August in a bid to expand its North American market share, which is largely made of their Barstool Sports operation.

But from Wednesday June 15, theScore.Bet will no longer take any deposits or accept any bets from customers. The US bookie was acquired last year for a reported fee of $2.1 billion and stock acquisition by Penn National Gaming.

The recently announced, but not unexpected, move into Canada will see theScore (theScore.Bet esports review) position itself as a market leader in the newly regulated market.

The company already has a successful sports news and statistics app in the country, that has millions of users, which they will attempt to leverage to dominate the Canadian betting industry.

Notes about theScore.Bet US closure

Within the first month of betting operations in the Canadian province of Ontario, roughly 79% of sports bettors downloaded and used theScore’s app to place a bet in the newly regulated market.

Ontario online gaming downloads since the market regulation on April 4 can be seen as follows:

TheScore had a total of 50% of all sports betting app downloads, followed by Bet365 with 36% and MGM and Bet Rivers with 3% each. This clearly shows the position of theScore in the market.

theScore.Bet, since its launch in April in the Canadian province of Ontario, has registered tremendous success, it is currently topping the app download chart in the newly regulated market.

With the stop of operations in the United States, theScore will focus on driving its growth in Ontario and moving its innovative technological drive north of the U.S. border.

Barstool sportsbook will focus on the U.S market; this is a strategic move from Penn National Gaming. Presently, the Barstool online sportsbook is available in Pennsylvania, Michigan, Colorado, Indiana, Colorado, Virginia, New Jersey, and Arizona.

Barstool will take the U.S market lead while theScore focus on retaining the market in Ontario.
The President and Chief Operating Officer of theScore, Benjie Levy, commented on the significance of both brands operating in two seperate markets and the opportunity it offers for the brands to explore and grow.

“This move enables us to maximize the value of both brands through our organic media and gaming approach. Key to our strategy is integrating theScore media app with Barstool Sportsbook, which we’re currently working towards”

“Bringing together theScore’s powerful mobile sports media platform with Barstool Sportsbook in a unified ecosystem, supported by our in-house technology and custom integrations, will strengthen the overall U.S. product offering and broaden its reach.”