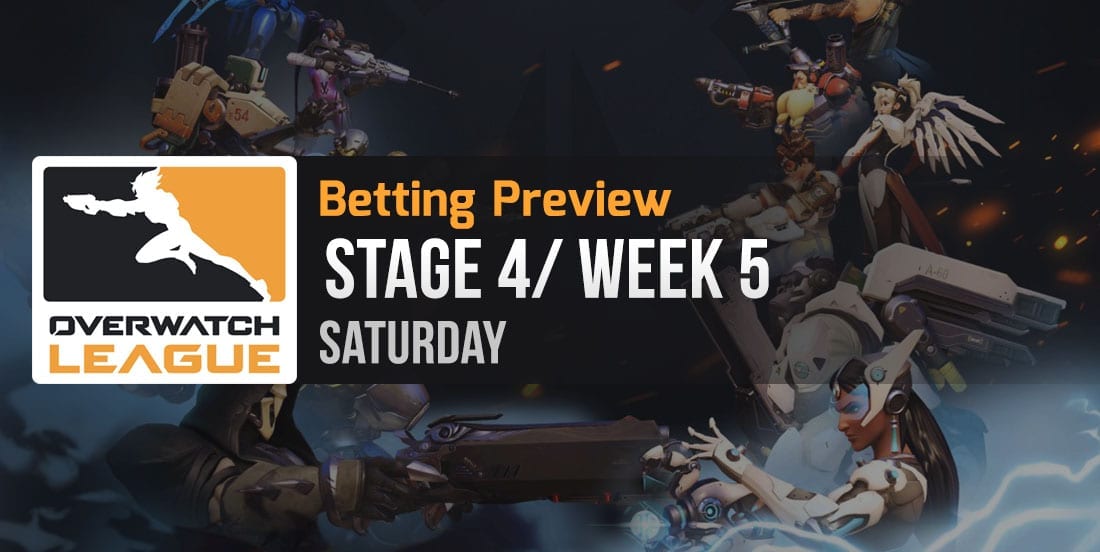 The first regular season of the Overwatch League is almost at the end. Just 6 more matches are left to be played (3 today and 3 tomorrow, in the Stage 4 Title Matches) and then we’ll have one month of silence before the inaugural season’s Playoffs.

This Saturday we will find out if Shanghai Dragons can actually win their first match in the Overwatch League. We’ll also find out the 4th team qualified for the Stage 4 Title Matches. As usual, in this article I’ll analyze the existing Overwatch betting opportunities.

Philadelphia Fusion has had another mediocre stage, mimicking its 5 V – 5 D performance from Stage 3. So far, in addition to the expected victories against Shanghai Dragons and Florida Mayhem, the team has defeated average opponents such as Boston Uprising, San Francisco Shock and Seoul Dynasty. Every strong team has crushed them without too many problems. Dallas Fuel, New York Excelsior, Los Angeles Gladiators and Houston Outlaws bested Fusion with ease, proving that they’re still quite far away from the top 4 in terms of strength.

London Spitfire is an almost identical case. In Stage 3, the team finished with a record of 5 V – 5 D. And it’s going towards an identical result in this stage too. All Spitfire needs to do is win this match, which it will very likely win all things considered. Spitfire has had slightly closer matches against the strong teams than Philadelphia Fusion. It still lost those matches, but the Stage 1 champion spirit is clearly still there.

In their latest 3 matches, London Spitfire lost against Los Angeles Valiant (1 – 2) and Los Angeles Gladiators (2 – 3), but managed to beat Florida Mayhem (4 – 0). The close defeats against the two strongest teams in Stage 4 clearly suggest that Spitfire is in pretty good shape right now.

The head to head record between these two teams is 2 – 2. The first two matches were won decisively by London Spitfire (4 – 0), while the next 2 were won by Philadelphia Fusion (3 – 2). Based on Spitfire’s recent performance against some very strong opponents, I believe they actually have a very high chance of winning this match.

Betway puts the odds at 2.37 – 1.45 in favor of London Spitfire, clearly favoring Spitfire to win this dispute.

As much as everyone wants Shanghai Dragons to win a match before the end of the league and avoid a historic 0 V – 40 D record, that’s probably not going to happen. It would be the stuff of legend and future esports documentaries if it did, but the odds of it happening are below 5%.

For a while it looked as if San Francisco Shock had the capacity to perform much better in Stage 4 than it did in Stage 3. Especially after bringing in Boston Uprising’s head coach. But that didn’t happen and Shock will almost certainly finish this stage with a 5 V – 5 D record, a slightly worse performance than that of Stage 3 (6 V – 4 D).

Recent form, overall form and head to head statistics all favor San Francisco Shock to win this match, most likely with a score of 3 – 1.

Betway puts the odds at 7.50 – 1.03 in favor of San Francisco Shock and at these odds, you should consider placing a small bet on the underdog and hope for a historic result.

Looks like Boston Uprsing has woken up. A little bit too late I’m afraid but still, the team went from 0 V – 6 D to 3 V – 6 D in its last 3 matches. And two of the opponents it faced are actually legit teams: Seoul Dynasty and New York Excelsior. I personally can’t understand how New York Excelsior managed to lose against Uprising in its current condition, but it still happened somehow. In any case, the 10 V – 0 D record breakers from Stage 3 seem to be back to their usual game.

Apart from Shanghai Dragons, Florida Mayhem is the next worst team in OWL. Everyone beats this team except Dragons, so this match should be regarded as a perfect opportunity to make some easy money.

Betway puts the odds at 1.03 – 7.50 in favor of Boston Uprising, regarding the whole thing as a free money operation.