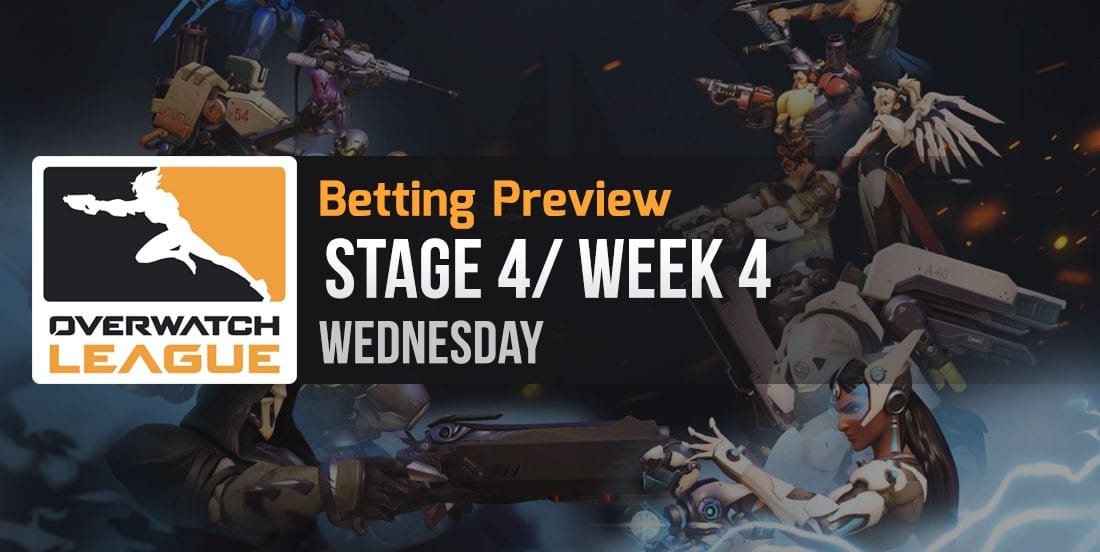 We’re already more than halfway through the 4th and final stage of the Overwatch League and there are only two more weeks until the end of the regular season. As always, this week’s matches offer plenty of Overwatch betting opportunities. But before I start analyzing them, let’s take a look at the current standings table.

Seoul Dynasty has had a poor Stage 4 so far, winning just two matches against the two weakest teams in the Overwatch League, namely Florida Mayhem and Shanghai Dragons. However, in spite of these results, it’s clear that Dynasty still has a pretty solid roster and a strong playstyle. This fact is proved by the team’s ability to take maps off top opponents such as Los Angeles Valiant (score 2 – 3).

I have no idea what has happened to Boston Uprising except for the fact that their head coach left at the end of Stage 3. Uprising finished that stage with 10 victories, 0 defeats and a 2nd place finish in the Title Matches. Now, the team is losing match after match regardless of who it faces and there doesn’t seem to be an end to this madness.

Overall performance throughout the Overwatch League and head to head statistics are completely irrelevant here, as Boston Uprising’s recent form has been so abysmal that a victory for it in this match is almost an impossibility.

Betway puts the odds for this match at 1.50 – 2.40 in favor of Seoul Dynasty, giving a lot of undeserved respect to Boston Uprising. At these odds, a bet on Seoul Dynasty is definitely worthwhile, as the team’s chance to win is above 70% here.

Shanghai Dragons is on a 36 losing streak and doesn’t show any signs of stopping anytime soon. In all likelihood, Dragons will finish the Overwatch League with a perfect record: 0 wins and 40 losses. The esports history books will surely mention this extraordinary performance.

Needless to say, the head to head record, recent form and overall performance statistics clearly indicate that Florida Mayhem will win this match, most likely with a score of 3 – 1.

Betway puts the odds at 2.55 – 1.45 in favor of Florida Mayhem. These odds are ridiculously high on Mayhem’s side, considering Shanghai Dragons’ current record. Forget about the fact that Mayhem is currently sitting on a 0 V – 6 D record in Stage 4. Shanghai Dragons has not yet won a single match in the entire season.

Dallas Fuel has put Jesus to shame in this stage, raising from the dead and winning no less than 4 matches, 2 of which against strong opponents: Philadelphia Fusion (3 – 1) and London Spitfire (3 – 1).

Houston Outlaws has performed reasonably well so far in Stage 4, getting 4 victories and 2 defeats. However, the main problem is that 3 of those victories came against irrelevant opponents: Shanghai Dragons, Boston Uprising and Florida Mayhem (all of them 0 V – 6 D right now). Outlaws’ only important victory came against London Spitfire (4 – 0).

Both head to head and overall performance statistics favor Houston Outlaws to win this match but based on what we’ve seen so far from Dallas Fuel in Stage 4, I think it’s more than likely they will grab the victory in this match.

Betway puts the odds at 1.80 – 1.90 in favor of Dallas Fuel, regarding the two teams of being almost evenly matched. Based on what Fuel has shown us so far in Stage 4, its chances of winning this match are at least 65%, which makes this match a great Overwatch betting opportunity.