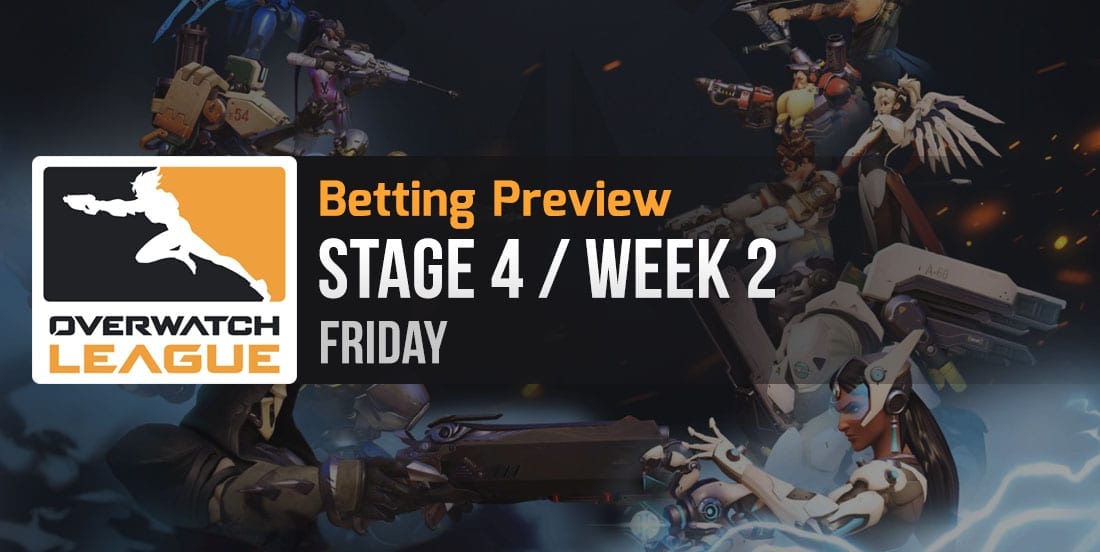 The second week of Stage 4 of the Overwatch League is well underway and the six matches that are left to be played over the next two days are full of Overwatch betting opportunities. But before I start analyzing these matches, let’s take a look at the current standings table.

Betting predictions for May 25

Los Angeles Valiant is one of the hottest teams in OWL right now and had a pretty good Stage 3, finishing in 3rd place with 7 wins and 3 losses. In the first two weeks of Stage 4 Valiant has defeated Seoul Dynasty, Shanghai Dragons and Florida Mayhem, clearly showing that it’s still playing well and should be regarded as a top contender.

Boston Uprising had a formidable Stage 3, finishing with 10 wins and 0 losses. The team only lost the Grand Final of the Title Matches against New York Excelsior and dominated every opponent throughout the rest of the stage. However, following this achievement, Uprising lost its head coach, who joined San Francisco Shock. This change was felt immediately and in the first two weeks of Stage 4 Boston Uprising has lost all of its matches. One against Philadelphia Fusion, one against Houston Outlaws and one against Dallas Fuel. This is a clear sign that the great team from just one month ago is no more and has been replaced with a shadow of its former self. Going forward, expect Uprising to lose most of its matches against the top contenders.

Based on what we’ve seen from both of these teams in Stage 4, head to head and overall performance statistics throughout the Overwatch League don’t really matter here. It’s quite clear that LA Valiant is much stronger than Boston Uprising at this point and should have a field day in this match.
Betway puts the odds for this match at 1.15 – 4.75 in favor of Los Angeles Valiant, anticipating a clean victory in its favor.

The head to head record between New York Excelsior and Seoul Dynasty is 3 – 0. In particular, the latest match ended with a decisive 4 – 0 victory for Excelsior. Recent form and overall performance statistics also favor Excelsior to win this match.

Betway puts the odds at 1.07 – 7.00 in favor of New York Excelsior, regarding this encounter as a guaranteed way to make money.

San Francisco Shock did well in Stage 3, climbing several positions compared to its usual stage placements and ending in 5th place with 6 wins and 4 losses. Among the team’s most impressive wins were those against Los Angeles Gladiators, Philadelphia Fusion and Houston Outlaws. In the first 3 matches of Stage 4, San Francisco Shock lost against Los Angeles Gladiators and London Spitfire and won against Seoul Dynasty.

Although it has a strong and capable roster, Houston Outlaws performed terribly in Stage 3 and finished in 9th place with just 4 wins and 6 losses. In the first 3 matches of Stage 4 however, Outlaws showed clear signs that it’s been hard at work to improve its playstyle, defeating both London Spitfire and Boston Uprising. The team lost against Los Angeles Gladiators. Going forward, expect Houston Outlaws to produce a lot of great results and defeat most of the top contenders.

The previous 3 matches between San Francisco Shock and Houston Outlaws ended with 1 victory for Outlaws (in the first match) and 2 for Shock (in the last 2 matches). Apart from this, recent form and overall performance statistics favor Outlaws to emerge victorious. Another key factor which makes me think that Outlaws is the favorite here is its Stage 4 victory against London Spitfire (4 – 0), a team against whom San Francisco Shock lost this week (2 – 3).

Betway puts the odds for this match at 2.95 – 1.35 in favor of Houston Outlaws and its assessment is correct.