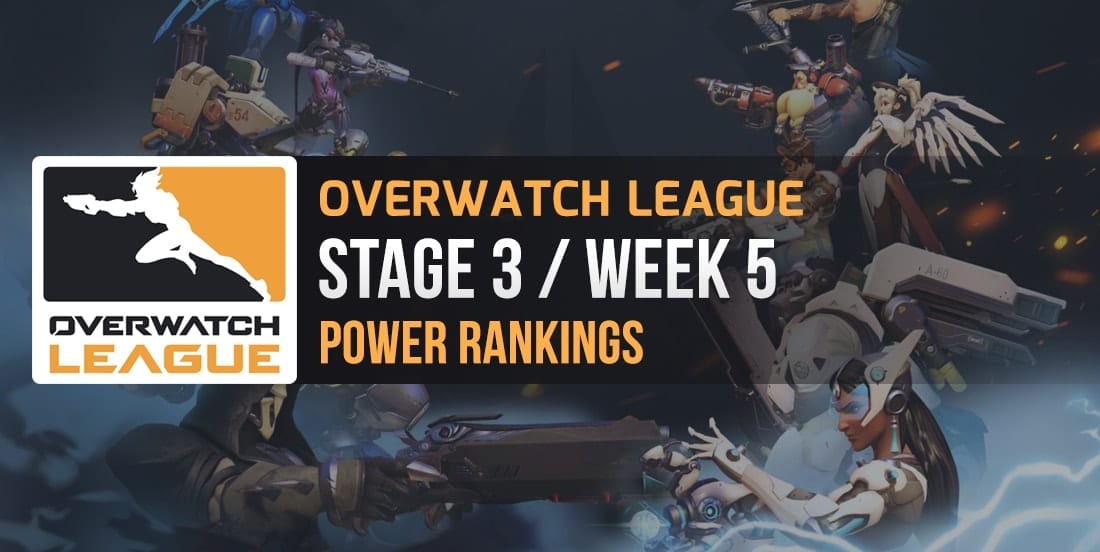 The fifth and final week of Stage 3 of the Overwatch League is starting this Wednesday and with the first four weeks already gone, let’s take a look at what the teams have been doing so far:

With every passing week, Boston Uprising is proving more and more that its recent form is here to stay. The team has changed a lot after Stage 2 and is now the strongest competitor in the league. Arguably, Boston Uprising has already faced the toughest opponents with the exception of Los Angeles Valiant, whom they will encounter this week. If it wins that match, Boston Uprising, will almost certainly be the first team to finish a stage in OWL without losing a single match.

New York Excelsior is the strongest team in OWL in terms of overall results throughout the entire competition. In Stage 3, Excelsior has managed to beat everyone so far with the exception of Boston Uprising. Their opponents were pretty strong for the most part, so most of the victories are totally relevant for assessing Excelsior’s true strength. In all likelihood, we will continue to see great performances from this squad. Given that New York Excelsior’s final two opponents will be Dallas Fuel and Shanghai Dragons, it’s almost a certainty that they’ll finish Stage 3 with a 9 – 1 record.

Currently sitting at number 3 in the standings table for Stage 3, Los Angeles Valiant has had an excellent run so far, defeating teams like Seoul Dynasty and Los Angeles Gladiators. Its two defeats came against London Spitfire and Houston Outlaws. Valiant’s current spot in the league might be quite deceptive, due to its many victories against very weak opponents. We’ll have to see how the team performs this week against Boston Uprising and Philadelphia Fusion. In all likelihood, it will get crushed by the first and then win against the second.

Los Angeles Gladiators could have done a better job in Stage 3, but the team has certainly been quite unlucky, as two of its defeats were very close (score 2 – 3) and came against top league opponents (New York Excelsior and Los Angeles Valiant). On the other hand, Gladiators also had some excellent results against Seoul Dynasty, London Spitfire and Houston Outlaws. Overall, Los Angeles Gladiators is a probably a stronger team than its current league position suggests, but its next opponents are Florida Mayhem and Boston Uprising. The first of these matches will likely result in a win for the LA team, but the second one will almost certainly be lost.

Apart from Boston Uprising, who completely destroyed them, Houston Outlaws got close defeats against strong teams (2 -3 against New York Excelsior, Philadelphia Fusion and Los Angeles Gladiators) and decent victories against the weaker teams. It also got two excellent results against London Spitfire and Los Angeles Valiant, clearly suggesting that you should never discard them as a weak side.

After its 2nd place finish in Stage 2, I think people expected more out of Philadelphia Fusion for this stage. Its losses against Boston Uprising and New York Excelsior are mostly justified, but its defeats against San Francisco Shock and Seoul Dynasty were a massive disappointments. Going into week 5, Philadelphia Fusion will likely win the first match against Dallas Fuel but the second one (against Los Angeles Valiant) will be much harder.

Seoul Dynasty is not in good shape, but the team is still a tough opponent against most sides. Inconsistency is what you should expect from Dynasty going forward, and poor results against the top competitors. In week 5, Seoul Dynasty will face London Spitfire and Houston Outlaws but its current head to head record against these teams is not good.

Along with Boston Uprising, this team played much better than usual in the first few weeks of Stage 3 but has lost its momentum since then and is now sitting at number 8 in the rankings table. San Francisco Shock’s defeats came against very strong teams (Los Angeles Valiant, Seoul Dynasty, New York Excelsior and London Spitfire), while 2 of its victories were obtained against fairly strong sides (Los Angeles Gladiators and Philadelphia Fusion). Going forward, we might see one more victory from Shock, as one of its week 5 opponents is Florida Mayhem. The other one is Houston Outlaws, which I don’t think it can beat.

After winning Stage 1 and placing 3rd in Stage 2, London Spitfire, lost all momentum and now is struggling in Stage 3, sitting at number 9 in the rankings table. Spitfire won 2 out of its last 3 matches, defeating Los Angeles Valiant and San Francisco Shock, but losing against Los Angeles Gladiators. In its last week of Stage 3, London Spitfire will likely win against Seoul Dynasty but then lose against Houston Outlaws.

Just like Dallas Fuel, Florida Mayhem is continuing the trend that it has already established in Stage 1 (1 W – 9 L) and Stage 2 (3 W – 7L). Overall, it’s pretty clear that this is one of the weakest squads in OWL and there’s not much that can be done to change that fact. Florida Mayhem’s only two successes in this stage have been obtained against Shanghai Dragons and Dallas Fuel. In all likelihood, Mayhem will end Stage 3 with a record of 2 wins and 8 losses.

With the exception of Shanghai Dragons, the Fuel are a team that doesn’t really count at this point simply because it has lost every single match it has played so far. At this point, there’s absolutely nothing the roster can do to catch up. Some transfers and a complete reinvention of its play-style are an absolute must going forward if Fuel wants to change its current situation.

And finally, we’ve got this strange team that seems to be trying its best not to win. Shanghai Dragons is on its way to establishing an absolute record that will probably remain unbeaten for many many seasons of the Overwatch League. So far, it has 0 wins and 28 losses. If it loses just one more match as part of this losing streak, Shanghai Dragons will establish an absolute record for the whole esports industry. No other team has ever lost 29 matches in a row. And given its next two opponents (New York Excelsior and London Spitfire), we’re convinced that this will happen.