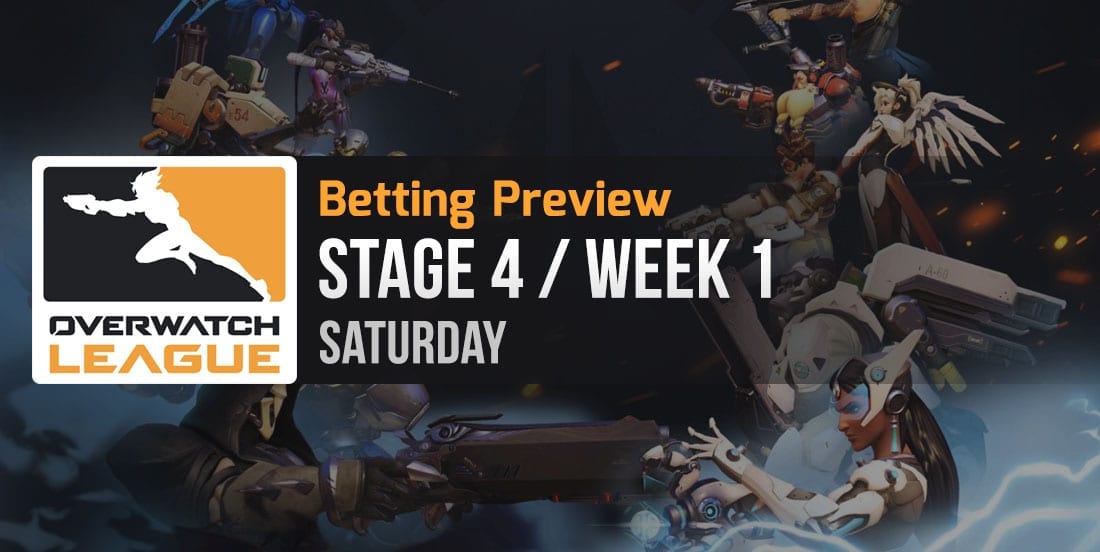 Week 1 of the 4th and final stage of the Overwatch League is well underway and there are only 6 more matches to be played. The pecking order seems to have changed to some degree, with new teams stealing the spotlight from some of the former top contenders.

These next 2 days offer plenty of Overwatch betting opportunities, but before I start analyzing the matches let’s have a look at several standing tables.

The Title Matches for Stage 3 ended with the following results:

Dallas Fuel ended Stage 3 with 1 win and 9 losses, losing multiple players along the way and being completely destroyed by internal conflicts. The team only managed to win 1 match and that victory came against Shanghai Dragons, which means it has almost no relevance at all. In Stage 4, Fuel played one match so far and that match was once again a victory against Shanghai Dragons. Going forward, expect to see this team taking a beating from almost all of its opponents.

Boston Uprising ended Stage 3 with a formidable record of 10 wins and 0 losses. The team was extremely dominant from start to finish and only lost in the Grand Final of the Title Matches, against New York Excelsior. One thing that worries me a bit is the fact that their head coach has left the team and joined San Francisco Shock. This loss has already translated into a first loss for Uprising in Stage 4, against a considerably weaker opponent: Philadelphia Fusion (score 1 – 3). This leads me to believe that Boston Uprising is a considerably weaker team now than it was in Stage 3.

In spite of having a strong roster with a lot of potential, Houston Outlaws had a terrible Stage 3, finishing with 4 wins and 6 losses (9th place). However, it still won some great matches against the top contenders and also defeated its first Stage 4 opponent, London Spitfire.

Given the recent form displayed by these two teams, I expect Houston Outlaws to win this match against Boston Uprising.

San Francisco Shock made a massive jump last stage in terms of skill, going from a 3 V – 7 D in Stage 2 to a 6 V – 4 D record in Stage 3. The team scored impressive wins against Philadelphia Fusion, Houston Outlaws and even Los Angeles Gladiators, ending the stage in 5th place.

Since both of these teams lost their initial Stage 4 matches, it’s hard to tell who’s in better shape.

Overall results throughout the entire duration of the Overwatch League clearly favor Seoul Dynasty. The head to head record between these two teams (0 – 3) also suggests that Dynasty is the better team and should win this match with ease.

Philadelphia Fusion had an average run in Stage 3 and only finished 8th, even though its record wasn’t all that disastrous: 5 wins and 5 losses. The team managed to get important victories against Houston Outlaws and London Spitfire, but failed to deliver against the top contenders. In Stage 4, Fusion’s start looks promising. A 3 – 1 victory against Boston Uprising is definitely a great result.

So far, Florida Mayhem has been one of the weakest teams in the league, ending Stage 1, 2 and 3 with a record of just 6 wins and 25 losses. That’s a win rate of less than 20%.

No matter what statistics you want to look at, Philadelphia Fusion is the much stronger side in this match and should easily win it.

Shanghai Dragons established a new record in Stage 3 and not just for Overwatch, but for the entire esports industry. Shanghai Dragons is now on an unprecedented losing streak and its best possible chance of getting its first victory was in its latest match against Dallas Fuel. However, the team lost that match (score 1 – 3) and is now expected to continue its losing streak until the end of the league.

Los Angeles Valiant improved its performance in Stage 3, ending with a record of 7 wins and 3 losses. This was much better than their Stage 2 result (4 W – 6 L), so the team is clearly on an upward trend. The opponents that managed to beat Valiant in Stage 3 were London Spitfire, Houston Outlaws and Boston Uprising. In Stage 4, Valiant already defeated a fairly strong adversary, namely Seoul Dynasty.

Overall, this is a complete mismatch and Valiant should have a field day against Shanghai Dragons.

London Spitfire suffered a steep decline in Stage 3, finishing 6th with 5 wins and 5 losses. Among the most important teams it defeated were Los Angeles Valiant, Seoul Dynasty and San Francisco Shock. In Stage 4, Spitfire began with a terrible loss against its nemesis, Houston Outlaws (score 0 – 4).

As the overall results table clearly shows, New York excelsior is the strongest and most consistent team in the Overwatch League. Excelsior finished Stage 3 with 9 wins and 1 loss (against Boston Uprising) and then went on to win the Title Matches, getting revenge and defeating Uprising in the Grand Final without losing a single map. Excelsior also won the Title Matches in Stage 2 and placed second in the Title Matches of Stage 1.

In its current form, New York Excelsior will likely mop the floor with London Spitfire, even though the head to head record between these teams is 2 – 2.