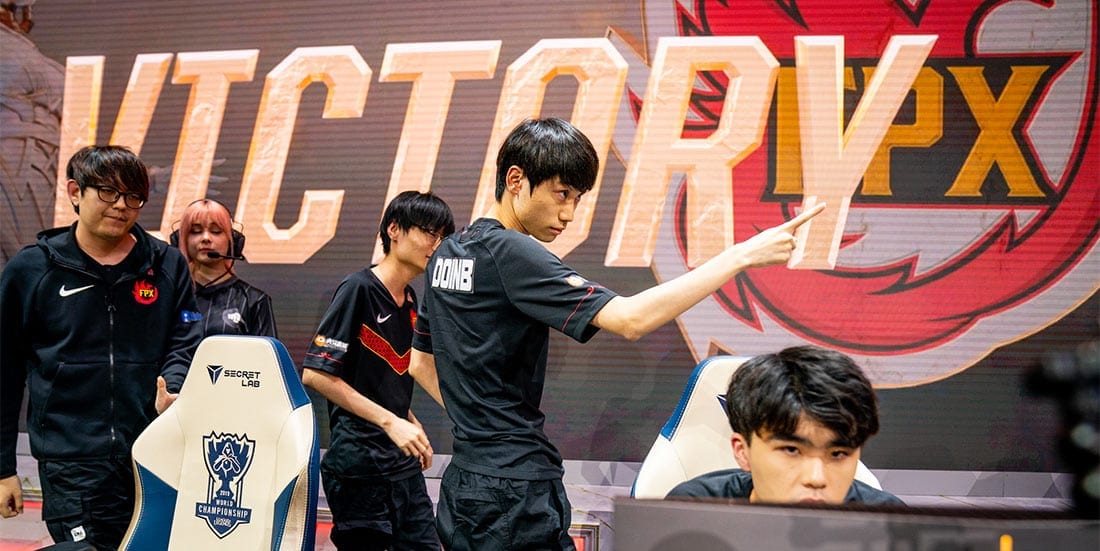 Fnatic’s dreams of lifting the Summoner’s Cup have crumbled to dust with their defeat to FunPlus Phoenix in the 2019 League of Legends World Championship quarter-finals.

Filled with confidence after an impressive finish to the group stage, Fnatic flew to Spain to leave a mark and prove their worth. But the Europeans fell flat against the LPL giants, who rose from the ashes to justify their status as second-favourites to claim the title.

Fnatic and FPX arrived on the stage to produce a match that was quite different from the previous series between IG and Griffin, as it was a fairly one-sided affair. Yet it did not seem like it from the start.

Fnatic and FPX lit up the atmosphere at the Palacio Vistalegre with level one fight next to Fnatic’s blue buff, which unfortunately netted no kills. But before the dust had a chance to settle, Gabriël “Bwipo” Rau made the crowd go wild by securing the first blood on Kim “GimGoon” Han-saem with his unconventional Rengar top pick.

.@Bwipo WITH THE DREAM START! SOLO KILL IN THE TOP LANE! #Worlds2019 pic.twitter.com/rxGVU2QBcC

While European top side flourished, their bottom lane suffered. Martin “Rekkles” Larsson and Zdravets “Hylissang” Iliev Galabov received constant visits from Kim “Doinb” Tae-sang’s Ryze, who made their laning phase harder than it should be.

The Chinese won two big team fights before the 20-minute mark, which forced Fnatic to play with their backs to the wall. Comes mid-game, Fnatic tried to utilize their split pushing composition, which backfired and caused them to fall further behind FPX, who took full advantage of the situation. They secured the Baron buff at 23 min mark, slayed their second Infernal drake and made one last push to destroy Fnatic’s Nexus, claiming the first win of the series.

.@FPX_Esports defeat @FNATIC in game one and take a 1-0 lead in the series! #FPXWIN #Worlds2019 pic.twitter.com/EDCLqXyEzI

Game two was not much different compared to the first one, as it marked yet another crushing defeat for Fnatic. While the LEC runners-up made some changes to their draft, it was their poor decision making that prevented them from turning the series around.

That being said, the match once again started in Fnatic’s favour, with Rekkles securing the first blood. Gao “Tian” Tian-Liang made his way to the bottom lane to even the score at four minutes and succeeded in doing so. In response, Fnatic decided on a risky dive under FPX tower six minutes in, which backfired in their face, as they went down three-for-one.

That play was also the turning point match, which tipped the scale into FPX’s favour, who secured the baron at 22 minutes and closed out the match less than three minutes later.

In game three, however, Fnatic showcased a dominant display of skill, which returned some hope to the European fans.

.@FNATIC get the mid lane ace and push down for the game three victory! #FNCWIN #Worlds2019 pic.twitter.com/m0QPB0aILM

Fnatic game their fans hope with their performance in game three, but in the end, they only delayed the inevitable. Like the opening two fixtures of the series, FPX were once more the dominant side. While Fnatic did manage to make a handful of strong plays, it was FPX who were slowly building the lead.

The decisive team fight happened in Fnatic’s base at 36-minute mark, when FPX decimated the Europeans, made one last push and sealed the series at 3-1.

With that, Fnatic became the first European team to leave the tournament, whereas FunPlus Phoenix became the second Chinese roster to advance into the LoL Worlds semi-finals. There they will meet with Invictus Gaming on Sunday, November 2, to determine which of the two will appear in the grand finals in Paris.