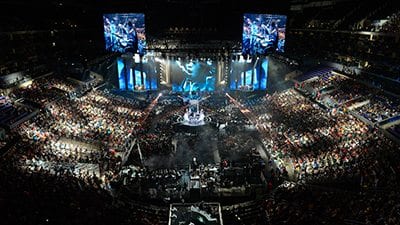 If there was ever any doubt in the growth and sustainability surrounding eSports, this latest report will put those doubts to bed.

Pro gaming appears to be going from strength to strength, with record-setting investment, increased audience ratings, and more games being added to the eSports circuit every year.

Now, the latest report to come out of the industry points to the investment paying off, with revenue expected to increase substantially over the next few years.

Newzoo has released its latest study on eSports revenue, and the figures point to a 12-month period of $696 million being pumped into the sport from multiple sources including sponsorship, advertising, subscription-based mechanisms, and other variables.

The company predicts that by 2020, the eSports industry will be generating more than $1.4 billion in revenue.

This year stands to be the best yet for pro gaming, according to Newzoo, with media rights being the next big battleground.

Companies like Activision Blizzard, Riot, and Valve are all looking for different ways to broadcast and sell their more popular professional games to large media markets.

Riot, developer of League Of Legends, has already sold the rights to broadcast its eSports games for a reported figure in the hundreds of millions of dollars.

The increase in revenue will come from beyond just broadcasting rights, however.

Newzoo predicts that there will be almost a 50 percent increase in merchandise and ticket sales, pushing the figure beyond $60 million annually.

The next 12 months is expected to bring in almost 400 million unique viewers in 2017, with nearly half identify as hardcore enthusiasts of a particular brand or game.

“eSports is not only growing exponentially as a new independent business and industry, it is also accelerating the convergence of various established industries,” Newzoo CEO, Peter Warman said.

“For brands, media, and entertainment companies, eSports provides a chance to capitalise on the favourite pastime of digital natives and Millennials: playing games and watching game content. With the arrival of live streams and events, gaming has entered the realm of broadcasters and media that can now apply their advertising business model to a market previously out of reach for them.”

Interestingly, the report does not include betting of any kind. eSports and its benefactors have come under fire somewhat the past 12 months, with a number of controversies aiming to compromise the sport’s competitiveness and legitimacy.

However, despite a history of betting scandals and underground gambling websites, Las Vegas bookmakers are embracing eSports, and have started taking bets for the Intel Extreme Masters Oakland.

Understandably, Newzoo considers gambling to be an industry in and of itself, sustainable away from the mechanisms of eSports more broadly.

eSportsbet’s opinion: It should really come as no surprise eSports is going through this sort of growth. Even with tiring games such as StarCraft and CS:GO still leading the way, there’s a constant stream of new and exciting games entering the competitive arena. Further, companies have improved the viewing experience tenfold over the past 24 months, making major events incredibly enjoyable, even for viewers not overly interested in the game being played. Expect the rise to continue on beyond 2020 and well into next decade.