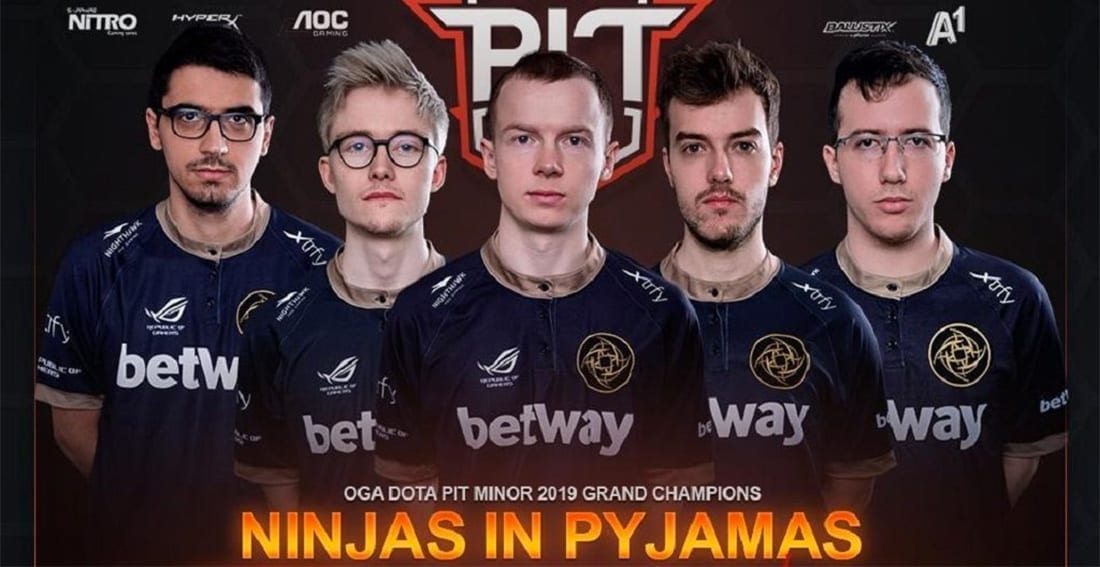 Ninja In Pyjamas has outlasted EHOME in the finals of OGA Dota PIT Minor 2019, securing the title and a precious ticket to take part in the MDL Disneyland Paris Major.

NIP took home the USD $125,000 prize pool and 120 valuable Dota Pro Circuit points to go along with its victory, stamping itself as a team to look out for in the sport’s next big major.

PDD is one of the best drafters in history of Dota 2, a reputation forged after helping his side win The International 5. He is not only their fifth role supporter, he is also their captain.

In addition to their captain, Aaron “Clairvoyance” Kim plays the role of coach, helping to analyse meta of the patch and enemy drafting tactics.

NIP started their first match in the group stage against Royal Never Give Up (RNG) and lost the series, due largely to the fact RNG banned Drow Ranger in game two and game three.

Then, on the second day of the group stage, NIP battled against Gambit Esports and out-played them by using Ace’s Naga Siren in game one and Fata’s Queen of Pain in game three.

NIP finished third in Group A after losing against BOOM ID in the final day of the group stage.

In the playoffs, they delivered a brilliant burst of form, refusing to surrender even a single game against Majestic Esports, Forward Gaming and Alliance.

Coming into the finals against EHOME, NIP totally out-drafted its opponent by picking Broodmother last, while EHOME had a lineup of Razor, Grimstroke, DoomBringer, Wraith King and Rubick.

It was not the best time to pick Broodmother because DoomBringer, Grimstroke and Rubick are able to deal with the spawn of Spiders. This is the reason the game lasted more than 50 minutes because Broodmother was not able to tear down many towers and pressure the middle too much in early phase.

NIP only took control of the game when Broodmother and Morphing had all their core items.

Learning its Broodmother lesson from game one, EHOME picked Winter Wyvern as their first support hero in game two. The pick lowered NIP’s chances of drafting Broodmother because Winter Wyvern’s ultimate skill, Winter’s Curse, targets an enemy and turns all the allies around the targeted enemy to attack him for a duration of 5.5 seconds.

Templar Assassin is very strong in early-middle phase of the game, but he is weak in late game because he’s unable to melt down any core heroes within a few hits after all the core heroes purchase their items.

NIP called GG when Medusa and Wraith King were out of control.

Fast forward to the last game of the series and both teams illustrated a farming draft and picked a lot of late game heroes as their cores.

EHOME picked Nature Prophet, Spectre and Ember Spirit as their position 1, 2 and 3, while NIP drafted Drow Ranger, Huskar and Doom as their core heroes.

After an hour of farming and team fights, Doom from NIP finally had his Refresher Orb and NIP won the last team fight thanks to Doom casting his ultimate kill on Spectre twice. The first time to disable his Linken’s Sphere and the second successfully casted on Spectre.

Spectre had to hide in the fountain more than twenty seconds to get extra regeneration, while Drow Ranger and Huskar were tearing down their throne.

NIP completes the team list for MDL Disneyland Paris Major as the last participant to receive a direct invite.

After taking 120 DPC points they have totalled 1690 and are only 2000 points away from qualification into The International 9.