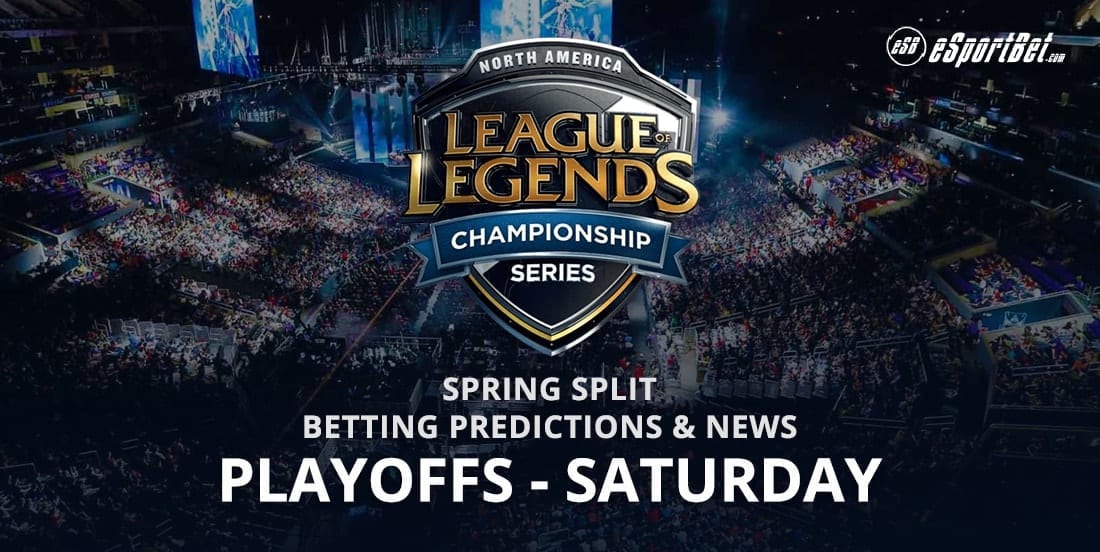 There are so many burning questions ahead of the Legends Championship Series North America Playoffs, including which of the inconsistent Cloud9 or Team Liquid will advance.

Team Liquid is hoping it can recover from a disappointing second half of the regular season, while Cloud9 has been in free-fall in recent times as they dropped matches to much lower ranked teams.

On Sunday, TSM will clash with Clutch Gaming, with one team from each quarter-final advancing through to the semis, where 100 Thieves and Echo Fox are waiting.

Our man in the know Spare has given his free betting predictions and team news for Saturday’s big clash.

Kicking off our first match of quarterfinals are the two veteran powerhouses of Cloud9 and Team Liquid. Both organizations have been with the NA LCS since its early days and have cemented themselves as respectable organizations with stellar coaching staff, expert analysts and top tier players. Both are teams that managed to hit the top six but both are also ridden with inconsistencies regarding their play. Team Liquid has faltered in the second half of the regular season with surprising losses against some lower tiered teams but managed to pull off wins where it counted, landing them the ever so acclaimed Team Liquid fourth place.

C9 has had it worse, completely losing out on the past few weeks, forfeiting upset over upset and frankly looking meager as of late. One thing is for certain though – both teams are full of veterans with tons of experience in long, best-of matches without any shortage of international experience.

Priorities – Less so in terms of picks/bans and more so in terms of play style, C9 focus should center around two main points – getting Licorice ahead and helping Svenskeren take over the jungle. Licorice has gone toe to toe with world class top laners such as Huni and Ssumday, but has shown the ability to make a good situation great or a bad situation worse. Svenskeren also has been making more daring plays but has yet to convert aggression into tangible leads or lane dominance.

Top Players – Jensen is a shoo-in for the C9 MVP, but Smoothie is just as integral to the team as well. Jensen excels at laning, dodging skill-shot after skill-shot while drawing jungle pressure from the enemy only to laugh as the ganks fail. Mainly sticking to farming mid laners, Jensen also does not shy from team-fights, providing heavy artillery from the mid range area using Azir, Cassiopeia and Ryze. Smoothie is also one of the heads of shot-calling, directing the team where to go and what to look out for. Although as of late, his calls have been questionable, he undoubtedly provides much in the sense of team-fight with his preference for hard engage supports.

Weaknesses – C9’s main weaknesses have to be Licorice and the Sneaky/Smoothie bot-lane. Licorice is heavily dependent on a snowball lead. Coupled with the fact he is the most junior on the main roster with little playoff experience, he just screams exploitation up in the top lane. Sneaky and Smoothie also have been performing severely under par with their league counterparts, usually getting repeatedly ganked and out-pushed during the second half of the season.

Priorities – Skyrocketing Doublelift and Olleh ahead to the point of no return. Any doubts about Doublelift from the past few weeks should have been obliterated after this week’s for’jhin’ate four performances. Taking up Jhin, he systematically destroyed in every single game he has used the marksman performer. A secondary priority would be to obtain a champion that Pobelter is comfortable on, but considering his vast pool, that should not be too difficult a problem.

Top Players – Doublelift, Xmithie and recently, Impact are thrown into the spotlight here. Doublelift is a top tier ADC with a superb KDA, excellent track record and amazing game sense. Xmithie has provided a backbone for TL in the jungle, performing not necessarily amazingly but as consistently as ever. His champion pool has expanded past the Sejuani he is awkwardly known for and as such, does not draw any more bans than is needed. Impact has struggled throughout the season, but this past weeks’ games has shown why Steve dished out the green for the Korean top-laner. Holding down the fort top has been a struggle for most top-laners, but Impact looks to finally have a handle on surviving, farming, and most importantly, rotating with his team to provide a sentinel for his allies.

Weaknesses – As a whole, TL is inconsistent. There are a lot of big name players on this team, and although they have had over two and a half months to iron out communication issues, there are still inherent flaws. When it comes to objective control, map rotations or pushing the tempo, TL seems to be slower than most teams in utilizing their movements. This leads to a forced fight or a poor objective timing which usually gives up unnecessary towers, map vision or forces TL to path inefficiently.

As veteran teams go, this match is the difficult one to call. However, Team Liquid has more all star players that have a history of performing when the time comes. In addition, Team Liquid has a better track record as of late over C9, and actually won the last two bouts these two teams have had. As a result, the prediction will fall in favor of the ever fourth place Team Liquid.

Be sure to check out our other Esports tips at our prediction hub
0 0 vote
Article Rating
Tags: Cloud9, League of Legends, NA LCS, Team Liquid