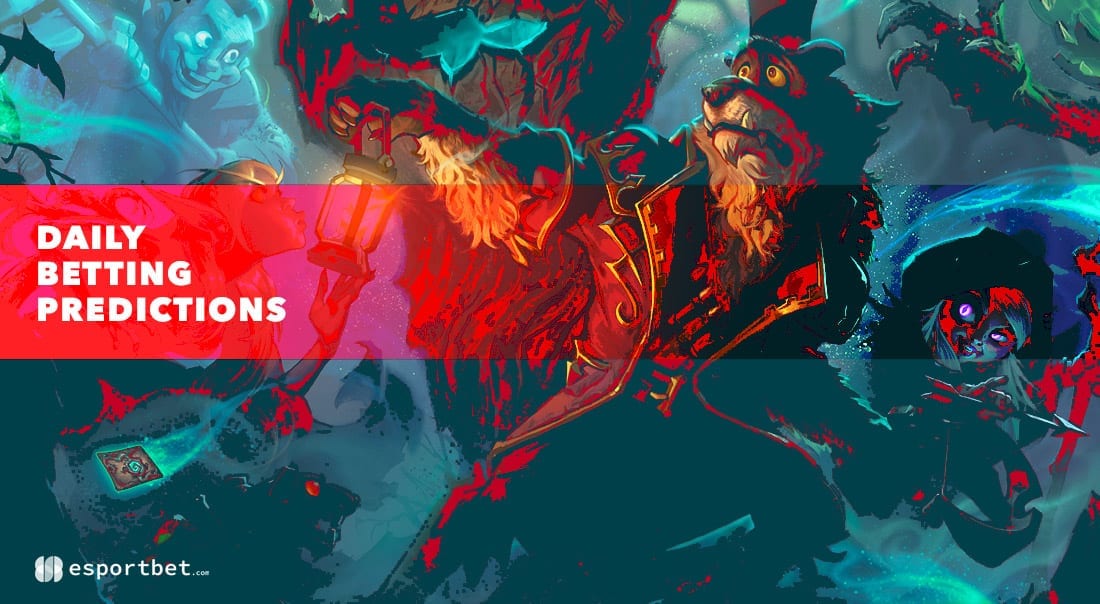 ESB’s free esports betting predictions for Saturday will focus on the final set of Group C matches at the 2020 League of Legends World Championship, the third season of CS:GO La Liga Pro Division, and a CIS clash between HellRaisers and Virtus.pro in the second round of LOOT.BET/CS Season 8.

Due to Team SoloMid’s lacklustre showings in the first half of the group stage, it’s entirely justifiable to see them priced as the underdogs for this match. What’s more, their biggest weaknesses – lack of strong macro and poor decision making – are Fnatic’s strong suits, which was fairly obvious in their first meeting.

Even though TSM have experienced and highly talented players on the roster, it seems like the only way they can walk away with a win is if Fnatic blunder the draft and underperform across the board. That, however, seems very unlikely after Fnatic’s solid performance against Gen.G last Tuesday.

Gen.G pride themselves on fielding some of the best players in the world – specifically mid laner Gwak “Bdd” Bo-seong and ADC Park “Ruler” Jae-hyuk, who are two key reasons that Gen.G are favourites to win Group C.

That, however, does not necessarily mean Gen.G will walk over LGD Gaming, nor does it justify the high odds offered on the Chinese squad. LGD, while a bitter disappointment in the play-in stage, have looked much better in the group phase and had no real issues winning against TSM and Fnatic.

While LGD lost to Gen.G earlier in the tournament, the match was very close and could have easily ended either way, which suggests we are in for another close affair. There is value in siding with LGD to win at $2.53, but we will play it safe and settle for a +6.5 kill handicap.

Straight after playing LGD Gaming, Gen.G will clash with Team SoloMid in what will be a crucial match for the Korean side. There are some concerns with Gen.G’s lack of preparation for this bout, however, as well as the added factor of fatigue following a tough match with LGD.

Last time they met, Gen.G and TSM produced only 15 kills (9-6), which is not entirely shocking since Korean teams are renowned for their slow and controlled playstyle. We expect more of the same here, so it makes sense to side with the North Americans on a +7.5 kill handicap.

Wygers Argentina hold a solid 2-2-3 record after seven rounds to sit in sixth place. That puts them one spot above Malvinas Gaming, who have managed only one win out of seven (1-4-2).

Despite their solid run through the competition, Wygers do not inspire much confidence with their 2-8 record since late September. Malvinas, on the other hand, are 5-2-3 in their last 10 and beat Wygers 16-12 only a couple of weeks ago.

Malvinas are priced very generously considering they have shown the better form of late. While they are 0-1-3 in their last four, Malvinas deserve some slack since they had to face 9z Team (3-16), DETONA Pound (1-1), Cream Real Betis Latam (10-16) and the current highest-rated Argentine CS:GO team, Isurus (13-16).

HellRaisers enter this bout with a 7-3 record, while Virtus.Pro have managed only one win in their last five outings. Despite HR’s better form, that does not necessarily mean they should be considered as a serious threat here.

Once a force to be reckoned with, HellRaisers are now nothing more than a mediocre B-Tier team. Across the last month, HR lost to Heretics (1-3), Team Secret (0-2) and Sangal Esports (10-16), which are all arguably weaker teams than Virtus.pro.

The only issue we have with VP is their lack of playtime, since they haven’t been involved in an official game in almost a month. Nevertheless, they’re still strategically and individually a better team than HR, who seem to do well only against weaker teams.

wow, those are pretty much all winners