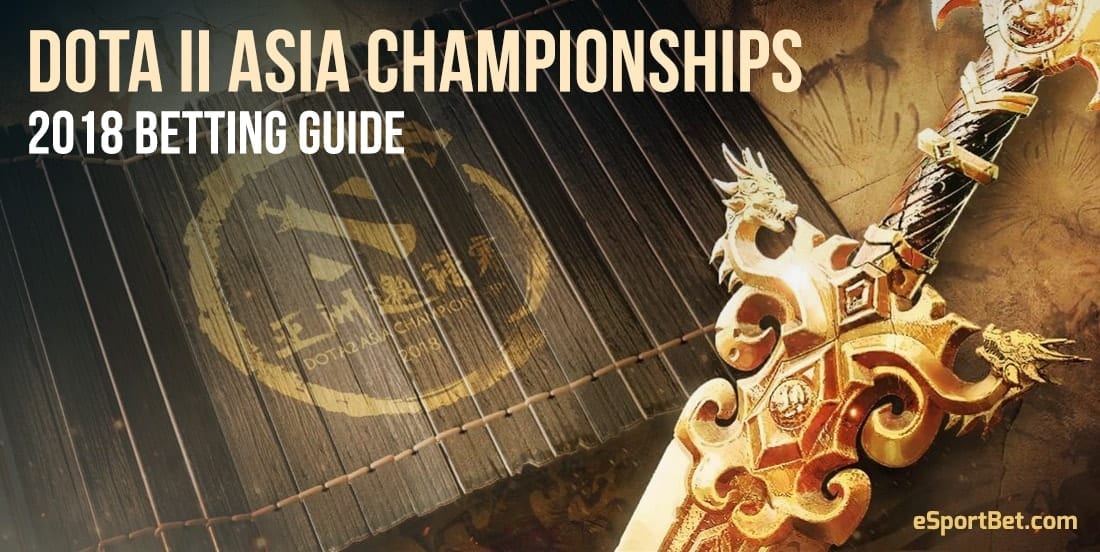 Dota 2 Asia Championships 2018 is right around the corner and with 16 of the world’s best teams and $1 million in prizes, the competition is sure to be fierce and the betting opportunities are many.

Between March 29 and April 7 the best bookmakers will be offering you plenty of chances to put your esports knowledge to use. DAC 2018 is regarded as the most important tournament of the season with the exception of The International, so you can be sure that special attention will be given to this event by all of the top betting operators.

Dota 2 Asia Championships 2018 will bring together 16 teams from all over the world:

Dota 2 Asia Championships 2018 will take place in 3 stages. In the Group Stage, the 16 teams will be divided into two separate groups.

One best-of-1 match will be played by each team against every other opponent from its group. At the end of this stage, four teams are eliminated (7th and 8th from each group), eight teams (3rd – 6th) qualify for the Breakout Stage of the main event (which consists of four elimination matches played in a Bo3 format) and four teams (1st-2nd from each group) qualify for the first round of upper bracket matches.

After the Breakout Stage ends, the main event will be played in a GLS format (double-elimination bracket).

Like all Major tournaments that belong to the Dota Pro Circuit, Dota 2 Asia Championships 2018 offers 1 million dollars in prizes and a total of 1500 qualification points for the next edition of The International. The event’s rewards will be divided among participating teams in the following way:

After their 2nd place finish at StarLadder i-League Invitational Season 3 and 1st place finish at PGL Open Bucharest, Mineski’s results dropped like a rock and the team disappeared from the spotlight for a few months. Then it resurfaced with top 4 finishes at two other Minors (StarLadder i-League Invitational Season 4 and Captains Draft 4.0) but in the last 2 months, Mineski has had a disappointing run.

Still, in spite of all this, the Southeast Asian team is much stronger and has a much better record in Dota Pro Circuit events than paiN Gaming, who always seems to get eliminated first, no matter what the tournament is. The South Americans’ only remarkable result this season was their 2nd place finish at World Electronic Sports Games. However, that kind of performance is irrelevant when considering Dota Pro Circuit events, simply because WESG did not bring together the typical world class Dota 2 teams, but rather a bunch of made-up teams. That’s because of the tournament’s fundamental rule: only teams with players of just one nationality were allowed to enter the event.

With just two notable results in the last 6 months (5th-6th place at ESL One Hamburg 2017 and 5th-8th place at World Electronic Sports Games), Keen Gaming is an outsider to the world of big Dota and has a mountain to climb if it wants to be competitive against most opponents in this tournament.

OG is not exactly in good shape right now. In fact, quite the opposite. However, the Europeans still have a lot more experience and much better results over the past 6 months, which indicates that they’re more likely to win this match against Keen Gaming.

Odds analysis: Bovada puts the odds at -200 / +135 or around 1.50 – 2.35 in favor of OG and the reason why these odds are so high on OG’s side is because they recently said farewell to their carry player, Resolut1on, after a series of poor results. At these odds, betting on OG would be a a wise decision.

The last direct match between these two teams (at The Bucharest Major) was won by TNC. The Southeast Asian team is considered to be the favorite this time again, although OpTic Gaming has shown obvious signs of strength recently, by defeating Evil Geniuses (the GESC: Indonesia champions) in the NA qualifiers for MDL Changsha.

How to bet on the Dota 2 Asia Championship

Dota 2 Asia Championships 2018 offers a lot more matches and betting opportunities besides the ones presented above. To find out more about them, check out our guide to the best esports betting sites and visit our partners’ websites. Also, keep in mind that the top contenders for winning this tournament are Virtus.pro, Team Secret, Team Liquid, VGJ.Thunder and Evil Geniuses. It’s very likely that these teams won’t be defeated in matches until they start encountering each other.