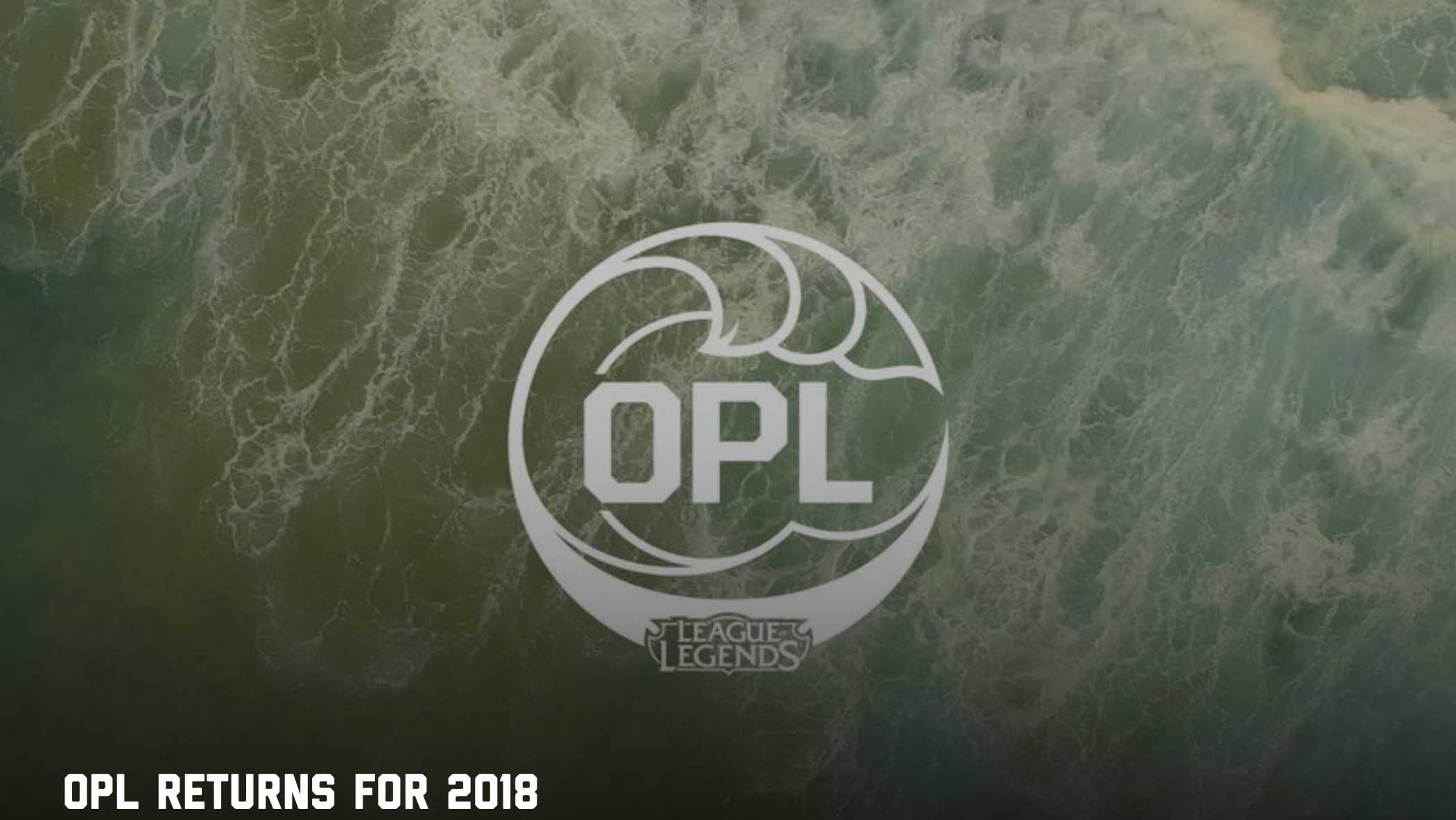 The Oceanic Pro League kicks off the Split one season on January 20 and the competition is set to be the biggest yet.

This season’s format sees the eight teams split in to two groups with teams competing in a double round robin within each group and a single across the two groups.

The Season is scheduled to run for 10 weeks with teams from Australia, New Zealand and surrounding islands battling it out for top honours in League of Legends.

After the split the top five teams advance to the Playoffs and qualify for the 2018 OPL split two while the remaining three will have to refight for their spot in the split two promotion series.

The season has opened in a storm of negative publicity with a swag of players suspended for poor behaviour. Riot Games released a statement saying eight players have been whacked with suspensions after violating the OPL ruleset, with penalties handed down under section 10.2.8. This section encompasses the terms of use article 5.1: negative behaviour.

“As the premier league in Oceanic LoL Esports, it is essential that OPL players represent the highest standards of player behavior. We will be working directly with the teams and players to improve in this area and ensure that these are isolated instances, not recurring trends,” the statement read.

The following players have been suspended for excessive in-game toxicity.

Where to place the bet: $7.13 on the dollar with Pinnacle.com

NB: All times are in Australian Eastern Standard Times

Chiefs vs Dire wolves promises to be a cracker and sees the 2017 grand final replayed here in the opening week and is the game to watch.

Chiefs were the infamous team who couldn’t be beaten taking out the 2015 and 2016 OPL Split Two Playoffs before Dire Wolves assembled one of the strongest rosters the OPL had seen and became the second ever OPL champions defeating The Chiefs for the 2017 title.

Chiefs game roster Swip3rR in the top lane, Bapip in the jungle, ry0ma in the middle and former Dire wolves player and now strategic coach Phantiks take over from suspended player Raes in the ADC position, with former Dire Wolves player Destiny also on support.

With a new roster the team set up a boot camp in Korea in the preseason to take on Korea’s best teams to get to understand the team’s strengths and develop new strategies, a move which is being reported as a great success.

Dire Wolves, the defending champions are back, and ready to defend their title the against former champions and runner up The Chiefs. Dire Wolves roster has existing member Chippys in the top lane, Shernfire in the Jungle and K1ng in the ADC position, they also have replaced their former mid Phantiks with Triple from Avant Garde and Cupcake for the support position from team legacy.

The game looks to be a thriller, Dire wolves not having the substitution and based on last year’s performance look to head in as the favorite and should be where your money is at. However Chiefs recent boot camp in Korea may prove to have helped bridge the gap between the teams.

Prediction and place bet: Dire Wolves to win this $1.48 at Pinnacle.com

Tectonic vs Order looks to be a clear-cut game with Order being the new team in the competition coming in with a power house team of old faces. With Tally in the top lane, Spookz in the jungle, Swiffer in the mid lane, FBI as ADC and Rogue as the team’s support.

Tectonic are also a new team that qualified in the loser’s bracket of the play offs after losing to the now rebranded Bombers. The team features Papryze in the top lane, Swathe in the jungle, Shok in the mid lane, Low as ADC and Tilting as the team’s support.

Prediction and place bet: Take Order with the -1.5 handicap at $1.381 at Pinnacle.com

Sin Gaming Vs Legacy Esports is an even match on paper that could go either way. Long time Legacy player Carbon is taking the back seat now as he moves to a managerial position and substitute making way for the next generation of legacy players.

This game we can expect Ceres in the top, Sybol in the jungle, Claire in the mid lane and Raid as ADC with Decoy as the team’s support.

Sin gaming come in to this game the underdog on paper. The expected team is Praedyth in the top lane, Juves in the Jungle, Bdoink in mid and Dream as the ADC. Both support and substitute support are on suspension, so it is not currently known who will be filling the support position.

This is Legacy’s game to lose and on any normal day they win this take, but Sin Gaming definitely have the ability to take a game out of the three.

Prediction and place bet: Legacy for the win at Pinnacle at $1.22 or if you are feeling like a curve ball take Sin with the +1.5 handicap at $2.17.

The team getting the most media attention at the moment is the Bombers which is the Essendon Football Club of the AFL’s eSports branch.

The team comes up against the historic team of Avant Garde.

The final team rosters are yet to be confirmed for the game and Avant Garde comes in as favorite by the bookies but you can expect the Bombers side to come out strong after the work that has been put in from the football club. Both team’s are impacted by suspensions however the large roster of the Bombers should ensure it doesn’t affect their side greatly.

Prediction and place bet: Take the Bombers with the +1.5 Handicap at $1.61 with Pinnacle.com.

Be sure to bookmark the page and check in weekly as we will have you covered with all your tips for the season.