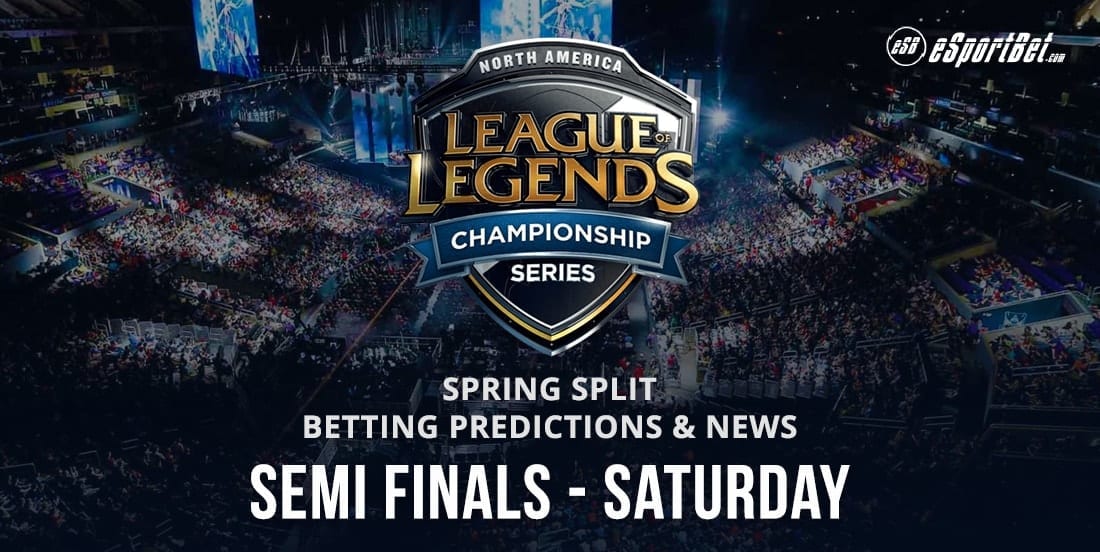 C9 gets blown out of the water by TL by losing the series 3-0 while TSM, after starting strong, got swept by CG in a 3-1 series.

Nobody expected C9 to roll over belly up, but considering the late trend of C9’s games, a loss was nearly guaranteed.

On the flip side, a lot of people predicted the heroes of old TSM to triumph yet again but were upset by CG who adapted much quicker on a game by game basis.

Treading into new territory, the NA LCS will finally have its first year without the big three even participating in the semifinals; CLG, C9 and TSM were all eliminated.

As a result, this year will be the first year that the split title will go to a new team. Even more exciting is the fact that 100T and CG are in the semifinals, an astounding accomplishment due to the freshness of these organizations. The semifinal matches are determined by seeding – the higher seed always plays the lower seed, while the two in the middle face off.

As a result, the matchups are:

The first semifinal match is between two teams that have more seniority in the NA LCS than their other semifinal counterparts. Team Liquid comes into this week feeling very confident after utterly dismantling C9 the week prior. Echo Fox has had a shaky second half of the split, dropping from first place to second place after a tiebreaker with 100T. However, FOX has had a week to shore up any weaknesses and plan new strategies due to their first round buy.

Priorities: This is arguably the most difficult section to analyze. FOX has recently been subbing in Damonte for Fenix and Papa Chau for Adrian to allow their Academy team to get some experience. If either of two are subbed in, ensuring that each receives a comfortable champion is important due to their relatively new arrival on scene. If FOX stick with their regular lineup however, playstyle wise should mimic their first half season – Dardoch on an engage support to snowball any lane. All of FOX’s laning strength can turn into a focal point to carry the game.

Top Players: Huni. I could say more but the player who won the best top laner by a landslide will take the role of MVP on FOX. Huni has the uncanny ability to turn any matchup into a winning matchup for himself and will almost never go negative in lane. And if Huni gets a carry toplaner while getting fed, godspeed to whoever has to match the split push. Other than Huni, Fenix has had a very consistent performance. Although not as much as a risk taker as Huni, Fenix absolutely knows the limitations of his champions and plays conservatively and efficiently.

Weaknesses: As of late, FOX has consistently lost the early game. Yes, FOX can trade a rift herald for first blood, maybe even take a dragon while the enemy team gets first tower. But all of FOX’s plays are reactionary and trading down in the early game is a precursor to snowballing the enemy team. This early game deficit is mainly due to playstyle and team cohesion; even when drafted an early game team composition, FOX could not capitalize on picks needing to snowball early such as Zac and Caitlyn.

Priorities: Banning out anything that can one sidedly destroy Impact in the toplane. On one hand, we have the stalwart guardian in Impact but on the other we have the most aggressively versatile toplaner in Huni. If Impact gets soloed in lane, this series will not be competitive at all. Other than that, placing emphasis on the standard ADC and Mid lane carries of Doublelift and Pobelter to guarantee comfort and playstyle would be ideal.

Top Players: Doublelift and Xmithie. In their matches versus C9, both of these players performed outstandingly with Doublelift still in his top form since late in the regular split. Xmithie played the role of the super fast scorpion, piloting engage after engaging and more importantly, rarely taking kills to skyrocket his laners ahead. Xmithie’s champion pool is also nothing to scoff at, possessing enough skill to work around the big three S tier junglers. Doublelift went unkilled in his series against C9. That alone speaks volumes to his conditioning coming into this week.

Weaknesses: TL has proven lately that despite their inconsistencies, they are strong across the board. When it comes to exploitation, the most likely avenues would be Impact and Olleh, both of which are not glaring weaknesses at that. As a team, TL is more focused on the win botlane, hold mid and top even and eventually, through experience and veteran status, mid game rotations would end up in their favor. However, if they are attacked early on in the game and build a deficit, TL has shown signs of crumbling.

The odds and best bet

The battle between 2nd and 4th seed has some intricacies that alter the playing field severely, namely FOX’s mixed roster and TL’s ability to play their powerful win lane style. Team Liquid though has been on an upward streak whereas FOX has been out of competitive play for nearly two weeks. As such, I see TL as the favorite to upset the 2nd seed.

Correct maps score best bet: 3-1 win to Team Liquid paying +350 – Bet365 (for those outside the USA) and BetOnline.ag both have this option available.

The best bookmaker for you to sign up at from your country for esports is BetOnline or read more about the best esports betting sites.