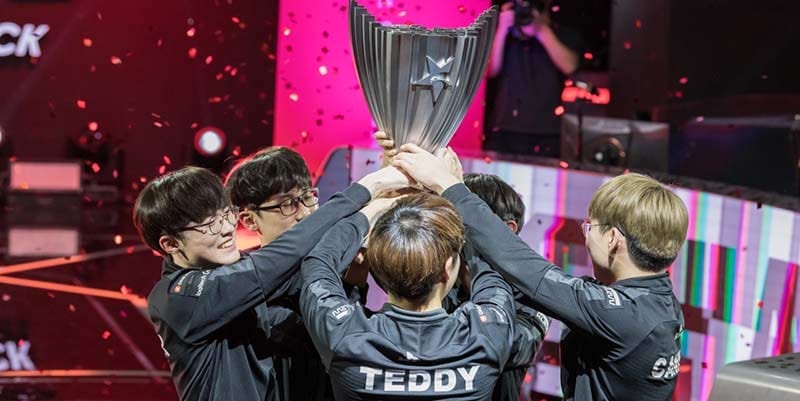 T1 secured their ninth League of Legends Champions Korea (LCK) title on Saturday with a commanding 3-0 win over the top side in the LCK 2020 Spring Split regular season, Gen.G.

The LCK Spring Split grand finals were billed as a close contest, with several esports betting sites installing Gen.G as the favourites. However, T1 have a reputation for shifting into a higher gear when playoffs roll around, and that is exactly how things panned out on this occasion.

T1’s entire roster put up excellent performances over the weekend. The standout, however, was jungler Moon “Cuzz” Woo-chan, who received the Most Valuable Player award for the LCK Spring Split finals.

Another member of T1 who deserves special praise for his contribution is head coach Kim “Kim” Jeong-soo. His draft knowledge came to the fore in the second and third games, where he was able to take advantage of Gen.G’s questionable picks. That made up for T1’s inauspicious start to the match, as they lost two ban picks for the first game as a penalty for arriving late to the LCK Arena.

Our history continues and here’s our hero tonight.
We are proud to present the MVP of 2020 LCK Spring Finals, CUZZ!#T1WIN #T1Fighting pic.twitter.com/1J4IaGOYhN

What makes T1’s title-winning run even more impressive is the fact they entered the 2020 season with a huge question mark above their heads after top laner Kim “Khan” Dong-ha, jungler Kim “Clid” Tae-min and support Cho “Mata” Se-hyeong left for FunPlus Phoenix, Gen.G and Royal Never Give Up respectively. Cuzz was one of the players who came in to fill the void, while Kim “Canna” Chang-dong and Lee “Effort” Sang-ho also achieved high marks in their first split at T1.

Cuzz and Effort made the All-LCK Second Team with 125 and 98 MVP points respectively, while was the league’s fifth-ranked top laner with 81 MVP points to his name. Park “Teddy” Jin-seong was named as the bottom laner in the All-LCK First Team, while Faker made the All-LCK Third Team in the mid lane.