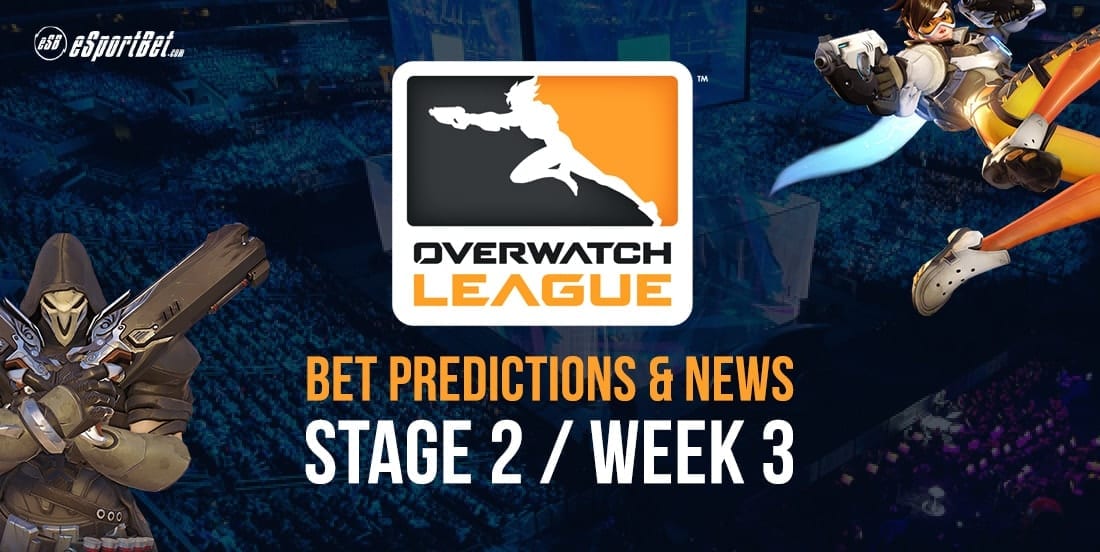 The second week of the Overwatch League Stage 2 came to a close and the third one is right around the corner. The 12 matches that will be taking place this week present some excellent betting opportunities, so let’s take a closer look at them.

Seoul Dynasty began Stage 2 of the Overwatch League with 4 consecutive wins, proving that the disappointing finish from Stage 1 was nothing more than an accident. Right now, the team seems unstoppable and most of their opponents are overwhelmed by their strategies.
What makes this match almost a predetermined result is the fact that Shanghai Dragons is at the exact opposite end. They didn’t win a single match in Stage 1 and have already accumulated 4 defeats in Stage 2. Even when they were challenged by opponents much weaker than Seoul Dynasty (teams like San Francisco Shock and Los Angeles Gladiators), Shanghai Dragons lost without scoring a single point. And if those encounters ended with a 4 – 0 result, this one is almost guaranteed to end the same way.
Bovada puts the odds at -3300 / +900 or around 1.03 – 10.00 in favor of Seoul Dynasty, as this is basically free money to be made. The probability of success here is over 99%.

Both of these teams finished Stage 1 with a record of 3 wins and 7 losses, but the direct result from their previous encounter favors Dallas Fuel, as well as the current standings table in Stage 2. In this stage, the only victory for San Francisco Shock came against Shanghai Dragons, making it entirely irrelevant for this encounter.
Bovada puts the odds at -180 / +125 or around 1.56 – 2.25 in favor of Dallas Fuel. And considering their chances of success against San Francisco Shock, this match represents a great betting opportunity.

Lost Angeles Gladiators got very close to qualifying for the Stage 1 Title Matches and they ended up finishing in 4th place with a record of 7 wins and 3 losses. In Stage 2, they’ve won 3 matches so far and only lost once, against Seoul Dynasty. The loss is justified because the opponent was very strong, while the victories were good but not impressive, coming against relatively weak teams. But still, a 3W – 1L record is a great start for Valiant in Stage 2.
On the other side, Lost Angeles Gladiators is a team that can go head to head with Valiant but is weaker in every respect. They would have to be at their very best to win this match and even in that case, Valiant would still need to make a number of unforced errors. Otherwise this match can only end one way.
Bovada puts the odds at -190 /+130 or around 1.53 – 2.30 in favor of Los Angeles Valiant. At these odds, a bet on Los Angeles Valiant is definitely worthwhile.

These two teams are the top of their game at the moment, but their potential greatly differs. While Philadelphia Fusion is doing well against most of the teams, Seoul Dynasty is capable of beating anyone.
Philadelphia Fusion’s most important victory in Stage 2 came last week against Houston Outlaws (3rd place in Stage 1), while their only defeat came against, New York Excelsior (the vice champion from Stage 1). Looking at their results, you can easily conclude that they’re an underdog whenever they face top teams.
Unless something spectacular happens, this match should be won by Seoul Dynasty with relative ease.
Bovada puts the odds at -450 / +275 or around 1.22 – 3.75 in favor of Seoul Dynasty.

This will likely be a very close match, and given these teams’ recent form, we could see a Los Angeles Valiant victory, which would be an upset. Of course, the standings table favors them, but the individual results and the overall strength still point towards a Houston Outlaws victory.
Houston Outlaws ended Stage 1 in third place and are currently 7th in Stage 2 with 2 wins and 2 losses. They won against one top opponent (London Spitfire) and one average opponent (Boston Uprising). Their losses came against New York Excelsior and Philadelphia Fusion. This second match was lost due to a lack of focus on Houston Outlaws’ side, who were 2 – 0 after the first 2 maps and then went on to lose (score 2 – 3 in the end).
Bovada puts the odds at -210 / +140 or around 1.48 – 2.40 in Houston Outlaws favor. They are certainly the team more likely to win this match, but the chance of an upset is significant.
Best bet: Houston Outlaws to win: $1.48 at BetOnline

This match constitutes one of the greatest betting opportunities on this list, simply because the odds are decent and the two opponents are lightyears away from each other in terms of strength. Boston Uprising finished Stage 1 in 6th place with 6 wins and 4 losses, while Shanghai Dragons lost all of their matches so far (14 out of 14).
Bovada puts the odds at -450 / +275 or around 1.22 – 3.75 in favor of Boston Uprising. At these odds this is a great betting opportunity, as the likelihood of a victory in favor of Boston Uprising is higher than 90%.

London Spitfire, the Stage 1 champion, should have a field day against Boston Uprising. The only worrying thing about this match is the result of the previous direct encounter between these two teams. That encounter was a huge upset and was won by Boston Uprising (score 3 – 2). However, it is highly unlikely that London Spitfire will repeat the same mistakes and lose another match against a much weaker opponent.
Best bet: London Spitfire to win: odds to be announced soon – check BetOnline

New York Excelsior was expected to win Stage 1 but ultimately finished in second place, after losing to London Spitfire in the Grand Final. Now they seem determined to go all the way, and in their first 4 matches they got 3 victories and only 1 defeat (once again, against London Spitfire).
This match against Philadelphia Fusion will be a real test for the New York team, who lost their previous direct encounter against them in Stage 1 (score 2 – 3).

This match can only end one way. Considering the fact that Houston Outlaws finished Stage 1 in 3rd place and looking at Florida Mayhem’s record during the first 2 stages, you can easily conclude that one of these teams has a huge chance to succeed (above 95%) while the other one seems destined to lose.
Houston Outlaws to win: odds to be announced soon – check Bovada.com

Loss Angeles Gladiators was one of the weaker teams in Stage 1, finishing 8th with 4 wins and 6 losses. At the other extreme, London Spitfire won the Stage 1 Playoffs and are looking poised to qualify for the Title Matches again. The chance of an upset is very low here, so a bet on London Spitfire is definitely worthwhile.

This is a complete mismatch but unfortunately, the huge strength difference between these two teams will likely be reflected in the odds. If New York Excelsior’s odds will be greater than 1.10, this match is definitely worth betting on, as the chance of success is almost 100%.
These two teams haven’t met yet, but the first one finished Stage 1 with 9 wins and 1 loss while the second one finished it with 3 wins and 7 losses.

If Shanghai Dragons is hell, then Florida Mayhem is just one step away from it. The team finished Stage 1 with 1 win and 9 losses and is currently losing every match in Stage 2. A team like Dallas Fuel should have no problem winning against such a weak opponent.